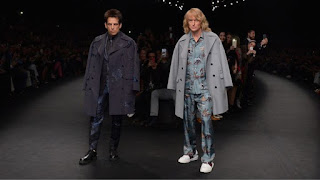 Opening:
This…uh…is going to be interesting. I guarantee you will be confused by my explanation and rating. This suffers from Dumb and Dumber To syndrome…kind of. Let’s get reel and break this down.

Plot:
Derek and Hansel are modelling again when an opposing company attempts to take them out from the business.

Pros:
I appreciate the passion Ben Stiller brings as a director because throughout the movie I felt like he genuinely cared in making a worthy sequel. On the most absurd and stupid level, I thought the story was creative and outlandish and, oddly enough, it fit in this Zoolander “universe”. I enjoyed the entertainment of the story on that level, however…

Cons:
This is not a funny movie. I may have smiled a few times and some things caught me off guard but there were a lot of misses. Most of the characters are wasted and it was trying way too hard to be dumb. It is a severe disappointment in this category since I enjoyed the first one quite a lot. The weirdest thing about the humor is that relied on dumb, raunchy, comedic violence, and smart humor and it didn’t have a consistent tone and was jumbled all over the place.

Pros:
Ben Stiller and Owen Wilson were committed but where this movie fails is the humor and how lazy and uninspired it was unlike the first one. Kristen Wiig has a handful of funny moments that are included in the already low amount of laughs generated.

Cons:
Besides a couple of cameos, everyone was wasted or uninteresting and I was scratching my head as to why some of these actors decided to be in it. It’s hard to talk about since I don’t do spoilers and there are a lot of cameos in here.

Cons:
When I got my bachelors in filmmaking, I am aware that I am not a great cinematographer. I am okay at best. But for some reason, this one looked cheaper than the first one. It had a made for TV look to it, which is never a good thing.

Pros:
The story was entertaining enough to keep my attention.

Cons:
The pace drags at certain points when jokes go on and on and the special effects and green screen look fake and never seemed like a big budgeted studio film.

Overall:
Ok, this is weird for me to say but I actually recommend it. I like the ridiculousness of the story so much that it’s pretty magical to witness. But when it boils down to it, it’s an uneven, unfunny comedy sequel that will be forgotten. Did I confuse you? It’s ok; go see Deadpool this weekend instead.