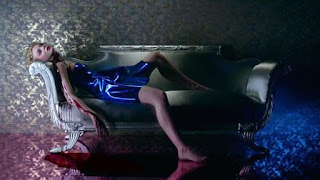 Opening:
If you were expecting for Nicholas Winding Refn to calm down and do something more restrained, buckle up buttercup, this one will turn some people off. Did it turn me off or did I secretly like it? Let’s get reel and break this down.

Plot:
When aspiring model Jesse moves to Los Angeles, her youth and vitality are devoured by a group of beauty-obsessed women who will take any means necessary to get what she has.

Pros:
This film has put me in a weird predicament. I like a lot of stuff and I dislike a lot of stuff. But, as time passes, I like it a bit more. The one thing I can give Refn credit for is that he tried out his version of a horror film and I admire the creativity he put in this story that is based in folklore's and fairy tales. This is more of a coherent story and it is easier to follow versus his other films and really keeps your interest with the vivid colors, beautiful cinematography, and a pretty sophisticated story about beauty and how it consumes people.

Cons:
I love Refn to death but dear lord his dialogue in his films can feel stale and badly delivered and this is no different. Most of the dialogue I don’t care for, but Refn can create visual storytelling without any dialogue so I don’t knock him too much for it. On the flip side, sometimes Refn can put scenes in that feel disgusting to be disgusting and really going overboard. There were a few scenes where they were way too much and didn’t really fit within the story. And the last thing is that the last ten minutes felt unnecessary and you could have cut it off and left the film on a more powerful ending. I am trying to be as vague as possible just in case you want to see it.

Pros:
Elle Fanning is electric in the main role and really carries the film commanding the screen with every scene. The supporting cast is fine. They add a creepy atmosphere to the tone of the film but…

Cons:
…some of the supporting cast are introduced, dropped off, and never really brought up again. Also, besides one character, everyone was unlikable and hard to justify their actions but the performances are very good.

Pros:
Simply gorgeous. Regardless of what you think of Refn, the guy has a beautiful visual style that’s all his own. The colors are rich and drench each scene with purpose. Whether it be a wide shot, tracking shot, or close-up shot, every shot feels inventive and abstract to the best degree.

Pros:
The special effects, regardless of the scenes they are accompanying, are well done on the low budget they had. I don’t really bring up music but the music is creepy and euphoric and takes the atmosphere of the film to the next level. The bizarre interest of the story will definitely keep your interest but be warned…

Cons:
…this is a slow burn, probably the slowest film Refn has done. It took a while to get into the story but once it locks in, so did I. The last ten minutes was such a bummer and deflated the energy after the climax and should have been cut.

Overall:
This is a bizarre, weird experience that I would recommend if you want something different. I love the idea of the story, acting, and cinematography; but I didn’t like most of the dialogue, undeveloped characters, unnecessary scenes filled with disturbing gratuity and no purpose. I might like this film as I think about it more but as it stands I am split about it. This is a graphic movie so, if you don’t get down with weird, abstract movies, stay away from it.