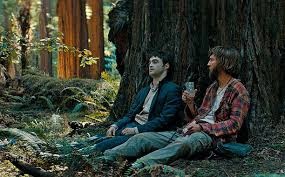 Opening:
The media has dubbed this film as “The Farting Corpse Movie”. Take that for what you will, let’s get weird, and get reel and break this movie down.

Plot:
A hopeless man stranded in the wilderness befriends a dead body and together they go on a surreal journey to get home.

Pros:
There is no doubt in my mind that this movie is extremely unique and you probably won’t find another movie like this. Amongst the blockbusters this summer, this summer stands out as being a breath of fresh air. The story is fascinating as we see this guy isolated and lost from the world hallucinate and become friends with a corpse, but there’s a lot more to it. The directors take this quirky story and add a delightful charm and endearment throughout which very palpable. Leading up to the climax of the film, I was completely in and then…

Cons:
…once the end happened I didn’t know what to think right away and had to think about it. I don’t mind open ended endings but I feel like this one should have had a bit more closure, even if it wasn’t completely explained. The last bit of the third felt a little clunky and rushed as if they didn’t know how to end it. I still enjoy it because I do have some theories on what the whole movie is and what is real and what isn’t…but a little more clarification wouldn’t have been nice.

Pros:
I have been praising Paul Dano ever since I saw There will be Blood and he went toe-to-toe with Daniel Day-Lewis. He once again proves he is one of the best underrated actors out there. His character within the film takes a creepy route but you felt sympathetic for his character and that is a testament to his great performance. Speaking of great performances, Daniel Radcliffe is actually pretty dang good as a corpse. He completely sold me.

Cons:
Maybe some of the side characters? I mean, they were fine, but the short amount of screen time that they had didn’t have the emotional pull that the two co-leads had.

Pros:
With hallucination as a theme, we don’t know what’s real and what isn’t and the way it’s shot adds that dream-like, surreal flow to it and really makes the colors pop and feel vibrant, as does the characters that accompany the screen.

Pros:
The addicting weirdness of the film is what keeps you going until the very last frame and that’s exactly how I felt. At an hour and a half, it’s the right amount of time but still has a lot of story and character arcs. The special effects looked like they were a part of a big budgeted film. They were so well done with that small of a budget and it impressed me.

Cons:
In the opening I said this was dubbed as the fart corpse movie, and I can say this film isn’t for everyone and it might turn you off in the beginning prompting the movie to feel long and just not connecting to you.

Overall:
This is especially unique and I will definitely remember it for doing something different but also having depth, charm, and a lot more to it than farts. If you want something different than the big summer blockbusters, this is your movie to get your weird fix.