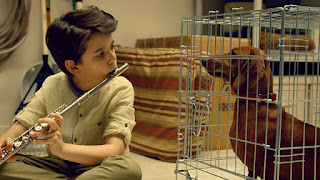 Opening:
If you love animals, this ending might just leave you in a cold, depressed state and you will go home and cry in the corner of your room for a week. But if you can look deeper into it, there is a lot going on. Let’s get reel and break this down.

Plot:
A dachshund passes from oddball owner to oddball owner, whose radically dysfunctional lives are all impacted by the pooch.

Pros:
On the surface, this is a simply story of a cute as heck wiener-dog going from person-to-person and we, as an audience, are dropped into these people’s lives and observing them. However, what the director has done was make each person have some soul and just show us a slice of life from different perspectives. There are a lot of real human moments that make this film play on a more realistic level providing great emotional pull. When the dog transitions from each person it makes sense with the story and feels flawless; however…

Cons:
…the transition between person three and four is garbage. There is no grasp of how much time passed or how the dog managed to get there. That irritated me to no end. And some of the dialogue is a bit stilted and a little too dry even though that’s the brand of humor.

Pros:
Everyone was wonderful. Each actor only had about 10-15 minutes of screen time and everyone delivered. With the limited amount of screen time, each actor really made the personalities of their characters standout making each one very impactful emotionally.

Pros:
To be honest, it’s fine, nothing bad about it but there really isn’t anything that creative. There is this light green glow throughout and this is the best way I could describe it: green, to me, means calm and is associated with Mother Nature and Mother Nature is a part of life, it’s natural. So the events in this film happen naturally and we kind of see just life unfold. I don’t know if that’s the correct correlation, probably not, but that’s the best I could come up with.

Pros:
For me personally, the end game of the story is what got me hooked and kept me going throughout.

Cons:
The film does have a slow pace and I can see it not really connecting with people. There is odd, dry humor and a very depressing undertone so I know this won’t appeal to everyone.

Overall:
This was a strange experience in the theaters but after I left I realized there was something to this film. It’s simply life and focusing on different people and the dog is in the middle of it. This is not for everyone and you will most likely not like the ending but if you want a smaller film amongst the blockbusters check it out.