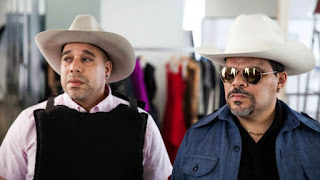 Just the title alone of this new feature directed by Ian Edelman who wrote the script with Neel Shah is about a low brow concept as one can expect, but the quality of the acting keeps the film from totally failing. Some formulaic scenarios with that whole fish out of water thing or more specifically street New Yorkers indulging in some high life in those most romantic city of the world while trying to track down who stole a designer bag makes for some amusing moments. Enjoyable at time, ultimately forgettable.

Luis Guzmán and Edgar Garcia play police brothers Luis and Eddie who track down counterfeit merchandise that are sold from New York street vendors. Luis considers himself the brains of the two while Eddie is the one that has to chase the criminals. Eddie is married to Gloria (Rosie Perez) who is his partner's sister, with three young boys and a teenage daughter. Gloria is exasperated with her husband forgetting their wedding anniversary. Luis is single and dating Vanessa (Rosario Dawson) who is exasperated because he says he doesn't want to get married. The police brothers are offered a chance to go to Paris when designer Colette (Alice Taglioni) and corporate boss Vincent (Frédéric Anscombre) ask for their assistance in tracking down a missing 1 of 2 exclusive prototype designer handbag. The ransom note threatened that unless payment is made, they will flood the market with it's counterfeits. The main suspects are Colette's inner circle, her head designer, her public relations, her model friend and her ex-husband. The guys go incognito to question each one to eliminate their suspects. It makes one wonder where the guys got their costumes...did they pack them? Oh well...if you haven't figured out the bad guy, then you will have to wait til the end.

The real chemistry is between Luis and Edgar as they bicker as brothers. Luis is ladies man who thinks he's all that despite his less than flattering physique and stereotypical pick up lines. Compared to good guy brother who is sincere and trustworthy who connects with Colette over parenting. It irks Luis to no end that most of the women are drawn to Eddie. Luis refuses to indulge into the beauty and magic of Paris, while his brother embraces the city. There's no real danger going on (handbags, really?), just a lot of silly set ups for the guys to be undercover. So, just by the film title, what you see is what you get.
(Review by reesa)