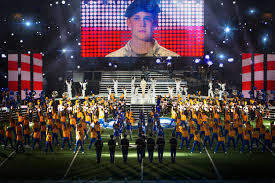 A lot has been said of Ang Lee’s unprecedented shooting and projection frame rate of 120 frames per second in 3D at 4K HD resolution. It’s the first film to be shot at such a high frame rate Lee wanted the film to be “immersive and realistic”. Unfortunately, the special equipment needed to view this new tech is only available in New York City, Los Angeles and in China. So, everyone else must settle for just a 2D format. There were also issues the filmmakers had to deal with using the high resolution which meant the actors could not wear makeup. Special silicone based makeup that can see through the skin was used to even out skin tone. Lighting had to use different approaches, and the actors could give nothing less than authentic performances.

Dallas’s own Ben Fountain wrote the novel of the same name in 2012 which received numerous positive reviews and several year-end awards. The screenplay written by Jean-Christophe Castelli may be serviceable to the novel, but the story is somewhat simplistic. Bravo Squad has been brought back to the States to embark on a victory tour to plug the war after a cell phone recording of their brave actions in Iraq go viral. Suddenly, Specialist Billy Lynn (Joe Alwyn) from small town Texas is a big time hero. A mantle that which he is not entirely comfortable. He recalls that day as the worst in his life when he lost his sergeant an Eastern philosophy spouting Yoda known as Shroom (Vin Diesel). The culmination of this tour before they are shipped back to war, is to appear in a big half time show production with Destiny’s Child.

The absurdity of their whole situation is held in check by Sgt. David Dime (Garrett Hedlund). He sees a leadership quality to Billy Lynn who is conflicted by his sister Kathryn (Kristen Stewart) who wants him to walk away from it all after the show. Meanwhile producer Albert (Chis Tucker) is fielding offers of a movie made of the squad with Hillary Swank in Billy’s role. Enticing the team of a possibly big pay out if a movie is made. The big Thanksgiving Dallas Cowboy game is organized by millionaire owner Norm Oglesby (Steve Martin), a slick greasy mover and shaker who is only concerned about the big event without thought that these young men are leaving the next day like this never happened.

There is interplay on those who truly are thankful for the soldiers and their sacrifices and those who just want to beat the snot out of them. Billy also finds love in a Christian Cowboy’s cheerleader who may be more attracted to him as a hero. Billy was confused and uncentered when he came back to the states for the tour, but somehow by the end he finds his real place in life. Without having the special 3D high def to bring to the table, even the excellent performances can’t make this movie anything remarkable. It would probably be better to read the book.
(Review by reesa)