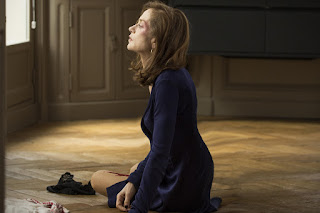 If This Was a Thanksgiving Dinner, Elle Would be the Turkey Carcass Your Dog Chews on for Weeks After

Opening:
Happy Thanksgiving and I hope you have a good week, that headline was for you. Back to the review, I want to pull my hair out after watching this. First let me say that I love Paul Verhoeven and the majority of his films. I can’t tell you how many times I have watched Starship Troopers, Basic Instinct, Total Recall, Robocop, or even the super trashy Showgirls. However, this was a huge misfire. Let’s get reel and break this down.

Plot:
A successful businesswoman gets caught up in a game of cat and mouse as she tracks down the unknown man who raped her.

Cons:
The subject matter is sensitive and Verhoeven takes it into a stupid, Lifetime movie. I don’t mind fun, trashy films but this was far from it. From the plot, I thought it was going to be a character study of someone re-entering society after a sexual assault, shame on me. The “mystery” of the attacker within is lackluster and comes off as lazy storytelling. The characters are lifeless drones of what a person “should” be and colossally moronic. Even the supporting characters are in and out of the movie and don’t add any substance. On top of that, every character is extremely unlikeable and you are praying for the movie to be done after the “reveal”. The way it also ends is baffling and leaves you to wonder why one of your favorite hard-R directors didn’t deliver.

Pros:
I guess everyone was trying their hardest even though they probably read the script and had no idea why they signed onto it?

Cons:
With the dark subject matter, you figure they would be some interesting shot composition and lighting. Well, you had wishful thinking. It’s about as flat and uninteresting as its characters.

Pros:
The opening scene is gripping and does command your attention but…

Cons:
…everything that follows just makes you want to leave as fast as possible, go home, and ball up in the fetal position because you realize you defend Paul Verhoeven on his other films.

Overall:
I don’t hate Paul Verhoeven or most of his films but when I see something like this I am passionately angry because I admire his other works and they have put joy into my life. Also, if you aren’t a fan of subtitles or foreign films, this is a French film. Just thought I would warn you. I love French films but obviously I don’t care for this one.