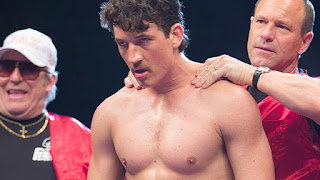 Opening:
I love a good old fashion underdog story, especially when involves boxing. However, this has to be one of the flattest boxing films I have seen and the actors and actresses are trying their hardest. Let’s get reel and break this down.

Plot:
The inspirational story of World Champion Boxer Vinny Pazienza who, after a near fatal car crash, which left him not knowing if he'd ever walk again, made one of sport’s most incredible comebacks.

Pros:
Everything outside of the boxing ring is well done in terms of grounding it in a gritty, urban reality. I felt like we were dropped in on a real family somewhere on the east coast. Yes, it’s a standard boxing film and some of the tropes are there but for it being the most inspirational comeback in sports history…

Cons:
…it was dull. Going with the overall story, it was lifeless and there is no emotional weight to any events, characters, or fights. Everything feels rushed and felt like just random scenes put together with no gravitas to anything. The characters are one-dimensional and you never feel like you know them. They are never explored and feel like cardboard cutouts despite it being based on real life people.

Pros:
One of the shining moments is Miles Teller and Aaron Eckhart. There performances, regardless of how they are written, are fantastic and I wish the story matched their commitment. Some great line delivery from both parties makes up some of the few scenes that actually work. Everyone else is fine at best.

Pros:
All the shooting within the cities are great and make you feel like you are there back in the 80’s and early 90’s having a real sense of community within the neighborhood.

Cons:
The actual fights are filmed pretty poorly. Listen, I don’t mind shaky cam but this was too much. There weren’t any sweeping, visceral, or gritty shots to really suck you in mentally and emotionally within the fights.

Pros:
I guess the two hours didn’t seem too boring?

Cons:
It does feel longer than it should because it feel lifeless and the jumbled nature the scenes cut together with the fights are jarring and the transitions are rushed.

Overall:
Not a bad boxing film but also not very good. It is down the middle for me but I will give the slight edge upward for the performances.

Email ThisBlogThis!Share to TwitterShare to FacebookShare to Pinterest
Labels: Bleed For This review, Chase Lee