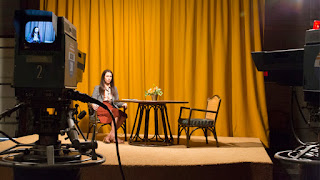 Rebecca Hall Shines in a Tragic but Very Good Film

Opening:
Dealing with this story and subject matter, it has to be delicate on how it is presented. While I was expecting excellence, I still ended up with a very good film. Let’s get reel and break this down.

Pros:
The Chubbock family has expressed disinterest in a film based around one of the most infamous suicides involving their family member. For the most part, the direction is well done capturing the era and tragic nature of the story without exploiting it. However, there is one big thing about this film that separates it from greatness…

Cons:
…the story is ultimately thin, yet engaging. The thing is the movie itself is good but it is completely missing that emotional depth that I thought it was going to have. Christine Chubbock is portrayed and acted very well but I never felt like the director explored her depression or her as a person enough to have an emotional grip when that final moment happens.

Pros:
Rebecca Hall is by far the best thing about the movie and really sinking into Christine as a person providing smaller, quitter moments that are very effective. If the story around her was as strong, her performance would be even better.

Cons:
The supporting cast around her is fine but nothing special.

Pros:
I am a sucker for anything set in the 70’s. The colors from the costumes, props, and sets really pop out providing for an eye candy experience and this is no different. And sticking with times, there is a golden glow that illuminates around and within the frame to really highlight the decade.

Pros:
Running at about two hours, I wish it was longer to explore a bit more within the characters but it runs swiftly as is.

Overall:
As a biopic and based on a real event, it’s good enough and is powered by a great performance, which I firmly believe an Oscar nomination is not out of the question, but falls short for me. I still recommend it.

Grade:
B+
(Review by Chase Lee)

Posted by Dallas Movie Screenings at 8:44 AM