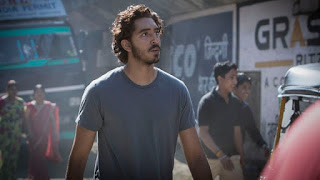 Lion is a true gem of a film. A must see. Visually stunning, via long lazy aerial footage, lush with people and culture, both gritty and enveloping, and auditory engaging via a mish mash of dialects and music, the film tells the true story of Saroo Brierly and his book "The Long Way Home". Saroo, as a five year old West Indian boy, took refuge at a train station in an empty rail car, while his older brother, Guddu, worked nearby overnight. He awoke to find the car enroute to Kolkata, around 1000 miles east of his small village, mother and family. Sunny Pawar stars as young Saroo in an amazing performance from one so young. Alone, wide-eyed and guided by self-survival skills, he bounces from crowded space to crowded place like a pin ball. The language barrier between Saroo, who speaks Hindi and the locals, who speak Bengali, prevents him from being understood by all the seemingly complacent passers-by. He did not know his mother's name, mispronounced the name of his home and to an extend, didn't even identify himself thoroughly. He ends up in an orphanage, after escaping friendly but dangerous sex traffickers, and is eventually adopted by a couple in Hobart, Tasmania in Austrailia. Saroo is later joined by a new brother, also adopted from India. His brother has not fared as well in adapting to his traumatic experiences. He demonstrates severe anger issues and turns to drugs as an adult while Saroo thrives in school and attends a hotel management program as an adult, where he meets his girlfriend Lucy. At 25, haunted and tormented by the images and voices of his mother and brother, who he imagines are still frantically searching for him after all these years, he decides to use google earth and what he remembers of the layout and landmarks of his tiny village, to try to find home and whatever may be there left for him.

This Golden Globe nominated film is the total package. It has an engaging story, guaranteed to produce tears in the eyes of even the hardest hearted. It is a vehicle for a wide range of stellar performances from Dev Patel as Saroo, Nicole Kidman as his new mother, and Rooney Mara as Lucy. The story unfolds into two parts; the road away from home with its daily struggles to survive, and the road back to home, bridged by the emergence of Saroo the adult survivor, who exists only because of the love and support of his adoptive parents, from the enormously engaging inner young Saroo. He is spurred on his journey home back to try to find the love of his birth mother, by his younger self. He is tormented by the fact that his life has been so charmed, and that the lives of so many have not been, including his birth brother and mother, who were poor laborers, trying to eak out a living despite having an absent husband and father. The pull of home, wherever-whatever-whoever that may be, is strong and is an integral part of one's identity. The story is a testament to the human will to survive and complete one's self and should see at least a few awards in the upcoming awards season.
(Review by Cheryl Wurtz)