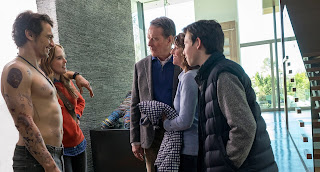 Comedy movies always seem to aim for the lowest common denominator, giving out a few laughs, but most of the time leaves one gritting their teeth hoping it's over soon. Director John Hamburg who created The Fockers, co-wrote the screenplay with Ian Helfer about an overprotective dad and the eager to please soon to be son in law. The women in the movie take a back seat to the male ego flexing. Fortunately the film has an interesting cast who seem to be having a good time so the 111 minute running time goes quickly.

Bryan Cranston plays Ned Fleming an uptight owner of a printing company in Michigan which is struggling due to the online competition. His beloved daughter Stephanie (Zoey Deutch) who is attending Stanford, wants the family to come to California at Christmas to meet her boyfriend Laird Mayhew. What Stephanie didn't tell them is that her BF is a gaming app tech billionaire living in this Silicon Valley minimalist eco-friendly modern mansion with really bad art (a bison encased in urine), nerdy employees, and celebrity hanger on's. It's as overwhelming as the blunt, gregarious and expletive spouting Laird, who James Franco plays with the seriousness of a new puppy. Mom Barb (Megan Mullally) is somewhat uncomfortable, but enjoys the amenities, and little brother Scotty (Griffin Gluck) practically hero worships Laird. The usual duck out of water shenanigans, the dad is caught up in keeping his princess away from the wild and crazy guy and Laird doing everything he can to impress his GF's family all in the wrong ways. It's a formula concept dressed up in a social media tech savvy world which in a year or so will be hopelessly out dated.

Thank goodness for Keegan-Michael Key who plays Laird's European estate manager who not only takes care of Laird's finances, whims and foibles, but also his martial arts trainer who physically attacks him by surprise at any given moment. He keeps the laughs going even while trying to fix the programming on a Japanese toilet that doesn't require paper. Kaley Cuoco is the voice of Justine, the Internet of Things, that oversees everything. Sort of Google Home on steroids and probably soon to be the next big thing. This is a movie for those cranky old stuck in the mud old guys and those long in the tooth hipsters battling for the fair princess. But no one asks what the women in this film think of all this. They are set up in these weird embarrassing scenes involving sex. It's annoying until KISS shows up then it's just ridiculous. Merry Christmas!
(Review by reesa)

Email ThisBlogThis!Share to TwitterShare to FacebookShare to Pinterest
Labels: Why Him? review