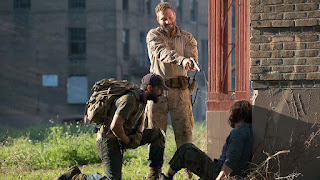 Shia LaBeouf has to work hard to dispel his real life foibles that often distract from the great performances he delivers such as American Honey (although that film was in itself disappointing). La Beouf embodies the character of Gabriel Drummer with an edgy intensity as a Marine who experienced a traumatizing incident in Afghanistan. Directed by Dito Montiel and written by Adam G. Simon, the films’ good intentions become a muddled and a confusing mess. It was screened at the 2015 Toronto International Film Festival and the 72nd Venice International Film Festival.

Drummer joined the Marines with his best friend Devin Roberts (Jai Courtney). Their training and deployment is told in a series of flashbacks while what seems like the present-day Drummer wandering around a post-apocalyptic world searching for this son. He and his wife Natalie (Kate Mara) are happy and proud of their young son John (Charlie Shotwell). They seem like the perfect couple while dealing with him being sent off to war. Then more flashbacks are introduced with Drummer speaking with Captain Peyton (Gary Oldman) a counselor with the Marines who has to access Drummer over an incident which involved the death of the men in his troop. The confident and patriotic young Marine seems to be fraying at the seams at this point and his mention of suicide raises flags with Peyton. A bottle of pills seems to be the counselor’s solution before he’s shipped back home. More flashbacks occur as Drummer painfully recalls what happened in the firefight.

It’s always important to shine a light on the problem of PTSD’s that affect the men and women returning home from their service in the war. Unfortunately, this film bounces back and forth confusing the most patient viewer. Also the color of the film is shot in a brownish pallet that doesn’t help clarify one flashback from another. La Beouf despite mumbling his dialogue, effectively portrays the fear and self loathing of what happened. The only thread of sanity that he hangs on to is the letter he writes to his son. Eventually it all makes sense in the end, but by then one just wants to leave the theater to get some real light and relief.
(Review by reesa)

Email ThisBlogThis!Share to TwitterShare to FacebookShare to Pinterest
Labels: Man Down review