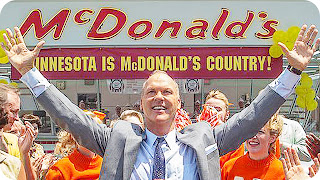 Director John Lee Hancock gives us another look at Americana with The Founder just as he did with the football in The Blind Side and Disney with Saving Mr. Banks. This is the birth of the fast food concept and big business of corporate restaurant franchising. If you have ever eaten at McDonald’s, like American dream stories, or if you are interested in business, you should see The Founder. This biographical drama tells the origin story of the fast food chain McDonald’s through the point of view of Ray Kroc and does not disappoint.

In 1954, Ray Kroc was a frustrated milkshake mixer salesman from a Chicago suburb when he received a serendipitous order from the McDonald brothers. Immediately intrigued, Kroc, hopped in his car and took Route 66 to San Bernardino, California, to experience a new burger joint called McDonald’s. Frustrated by burger drive-ins lack of efficiency, cold food, incorrect orders, broken and stolen plates, Brothers Richard “Dick” and Maurice “Mac” McDonald had figured out how to standardize restaurant food production in the most efficient ways possible creating a new walk up to go business model for delicious, fast food hamburgers with disposable packaging. Blown away by the “speedee” concept, Kroc convinces the brothers to let him franchise the restaurant.

Screenwriter Robert Siegel delivered an incredible script which honors the McDonald brothers and the legacy of Kroc. He tells the American dream story with all its blessings and curses using one of the biggest symbols of America –the golden arches. Everyone in the cast shines with spot on performances. Michael Keaton, who plays Ray Kroc, takes you on a range of emotions from rooting for him as the underdog to respecting and hating him. Nick Offerman who plays Richard “Dick” McDonald perfectly portrays the inventor and engineer showing his gifts and limitations. Laura Dern plays Kroc’s first wife. You feel her loneliness and sadness as a 1950s housewife every second she is on screen.

The path to creating one of the biggest corporations in the world was dirty, bumpy, and not pretty. Feelings are hurt. Hearts are broken. Fortunes are made. You feel for both the McDonald Brothers and Ray Kroc in the film. They all chased the American Dream with a series of businesses. As the McDonald brothers say in the film, “McDonalds is an overnight success thirty years in the making.” They all had financial disappointments but kept going. For better and for worse, the brothers took a conservative approach and Kroc went whole hog, but all three change our world.

Today, it is probably difficult to find an American who has never eaten at a McDonald’s. We know it by many names like the Golden Arches and Mickey-Ds. McDonald’s has sold over 100 billion hamburgers. It has become part of the American landscape and a symbol of America on the world landscape. It is estimated that over 68 million people eat McDonald’s everyday. And thanks to Harry Sonneborn and Ray Kroc, McDonald’s Corporation is the one of the largest landowners in the world. Most of its revenue stream comes from it property.

There are many great takeaways from this film:

1. If it is not in writing, it does not exist. Contacts. Contracts. Contacts. My Mother has been desperately trying to get me to understand this critical concept my entire life.

2. Dreamers and innovators usually can only take a concept or business so far. At some point, their big vision becomes narrow and they cannot take it to the next level.

3. There is no overnight success. We tend to only hear about success and what works. But for every success, there are countless failures where hard lessons are learned to later create the right conditions for “success” to happen.

4. You have to know what business you are in, because business is brutal.

7. Don’t give up on your dreams. Think big picture and dream bigger.

Posted by Dallas Movie Screenings at 9:13 AM