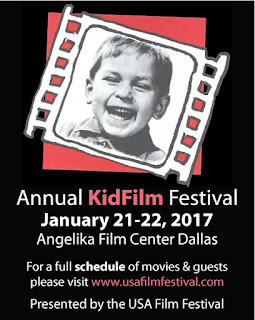 KidFilm is the oldest and largest-attended children’s film festival in the United States, featuring an entertaining, educational, and diverse line-up of new and classic films for both children and adults. KidFilm is an annual outreach program of the USA Film Festival/Dallas, a 501c3 nonprofit organization dedicated to the recognition and promotion of excellence in the film and video arts.

This year, the Festival pays tribute to favorite children's book authors and illustrators, celebrates diversity and tolerance, classic tales and films, magical journeys, and salutes environmental awareness with a program featuring live-action and animation, short films and feature-length works in a program for audiences of any age.

Honorary Co-Chairs for KidFilm are USA Film Festival Board of Directors members Kristin Carter Schor, Gail Terrell, David Dummer and Board President Laura Williamson. “We are so pleased to be able to offer this year’s program as a free-admission event thanks to support from the City of Dallas Office of Cultural Affairs and from the Festival’s Sponsors,” said Laura Williamson. “We are particularly pleased that so many of the films we are presenting this year feature themes of self-empowerment, education and appreciating differences in others,” said Williamson, “timely and important messages for children of all ages.”

Highlights of this year’s program include:

MEET THE AUTHORS AND ILLUSTRATORS! Screenings and read-alongs with all guests -- kids can receive a FREE book to have signed!

A Salute to author and illustrator Tom Lichtenheld. The program will include a screening of Groovy Joe: Ice Cream & Dinosaurs, his collaboration with Eric Litwin, followed by a reading and sing-a-long. Free copies of “Groovy Joe: Ice Cream & Dinosaurs” will be distributed at the show (while supplies last). After the on-screen program and reading, Tom will sign books for the kids.

A Salute to author Anna Kang and illustrator Christopher Weyant. The program will include a screening of You Are (Not) Small, followed by a reading of their new book “Can I Tell You a Secret?” Free copies of “Can I Tell You a Secret?” will be distributed at the show (while supplies last). After the on-screen program and reading, Anna and Chris will sign books for the kids.

A Salute to author Beth Ferry. The program will include a screening of Stick and Stone, followed by a reading of her new book “Land Shark.” Free copies of “Land Shark” will be distributed at the show (while supplies last). After the on-screen program and reading, Beth will sign books for the kids.

Free healthy snacks for all kids will be provided at the authors program by KidFilm Sponsor Whole Foods Market.

NEW LIVE-ACTION FEATURE FILMS include My Friend Raffi (Germany), Fiddlesticks (Germany) and a special 35mm KidFilm Classics presentation of Benji (1974) (U.S.), as we revisit the beloved pooch who starred in five feature films just before he gets a remake by original writer/director Joe Camp’s son, Brandon Camp.

In addition to SHORT FILM PRESENTATIONS of beloved children books adapted for the screen, an additional twenty-two short live-action and animated films from around the world will be presented this year.

A full schedule of KidFilm programs may be viewed on the USA Film Festival’s website at
www.usafilmfestival.com beginning 1/5/17. Printed KidFilm flyers may also be picked up at the Angelika Film Center Dallas beginning January 11th.

Tickets for all shows are FREE for children & adults!
Programs are free but you must have a ticket for admission; Tickets and seating are limited.

Tickets for all shows are available day of show only, beginning one hour before each showtime.

During KidFilm, please inquire in person at the KidFilm Information Desk at the theater.

The USA Film Festival is supported, in part, by the City of Dallas Office of Cultural Affairs and the Texas Commission on the Arts.

The 2017 KidFilm program is dedicated to educator and Weston Woods Studios founder Mort Schindel. One of the USA Film Festival’s National Advisory Committee Members, Mort Schindel passed away at 98 years of age this past summer leaving an incredible legacy to the world of children’s literature, media, literacy and learning. Schindel created his company Weston Woods Studios in 1953 with the sole focus of bringing children’s literature to life on screen through iconographic animation (a technique he invented), making the content more exciting and accessible, encouraging millions of young readers. Since then, the company has produced more than 350 motion pictures and 450 recordings -- always honoring Schindel’s mission that “A film should bring kids back to the book.”

Tom Lichtenheld doodled his way through school then worked as a sign painter, set designer, printer and art director. After a long career in advertising he accidentally (on-purpose) switched to creating children’s books. His work is noted for its humor, expressive characters and rich detail. He creates books that appeal to children and adults alike, and his portfolio of over twenty books offers something for every age. A number of his books, including Stick and Stone, created with Beth Ferry, and Goodnight, Goodnight, Construction Site, created with Sherri Duskey Rinker, have been New York Times Bestsellers.

Anna Kang was born in the Bronx and grew up on Long Island where she spent most of her free time reading Teen Beat magazine, Archie comics, and watching movies at the local multiplex. She studied International Relations and Asian Studies at Tufts University and Nanzan University in Japan, then followed her heart and moved to Los Angeles, where she received an M.F.A. from USC's School of Cinematic Arts and discovered what made her happy -- telling stories. After graduating, Anna was selected to participate in the Sundance Institute's Screenwriters Lab and Film Independent's Directors Lab with her first feature script, The Lost Tribe of Long Island. All of her experiences - personal, professional, and creative - led her to write her debut picture book, You Are (Not) Small. Being able to create it with her talented illustrator-husband, Christopher Weyant, made the journey all the more rewarding for Anna. Since creating their first book together, the duo has gone on to create two additional books thus far: Can I Tell You A Secret? and That Is (Not) Mine.

Christopher Weyant is a native of New Jersey and product of twelve years of Catholic School. Both experiences led to a life of humor and satire. A cartoonist for The New Yorker, Chris’ work has been published worldwide in newspapers, magazines, books and online, and he has worked on numerous national advertising campaigns. His cartoons are in permanent collection at The Whitney Museum of American Art and The Morgan Library & Museum in New York City. In 2014, the Nieman Fellowship for Journalism at Harvard selected Weyant to be a Nieman Fellow, the second cartoonist to receive that honor in Nieman Foundation's seventy-five year history. Chris' work has been featured on “The Today Show,” “Meet The Press,” "ABC News With Diane Sawyer" "Late Night with Seth Meyers", CNN, MSNBC, and Fox. He is the winner of the 2015 Theodor Seuss Geisel Award for his first illustrated children's book, You Are (Not) Small. Chris graduated from Gettysburg College with a B.A. in Political Science and Economics planning on a career as a lawyer. He gave it all up for a pen and a brush, and now lives outside New York City with his wife, Anna, and their two daughters.

Beth Ferry grew up by the beach where she spent most of the day reading. Her favorite childhood memories involve sun, salt, sand, and scribbling stories. She adores alliteration and the magic of rhyme done right. Her favorite word is anticipation and she loves the feeling of holding a book in her hand because she knows, through personal experience, that the book is holding her hand right back! Holding her own book, and having that dream come true, has been a feeling beyond compare for Beth. So far, she has written three children’s books: Stick and Stone, Land Shark, and Pirate’s Perfect Pet. Beth currently resides in New Jersey with her husband, three children and two bulldogs.

In addition to the KidFilm public weekend, special outreach programs are presented for thousands of Dallas Independent School District students (grades K–5) and educators. Students attend programs selected especially for them. Many of the films presented are book‑based and designed to be curriculum-interactive including relevant topics and issues (cultural awareness and diversity, compassion and tolerance, history, math, geography, the importance of education and reading, etc.)

About the USA Film Festival

Posted by Dallas Movie Screenings at 9:21 AM