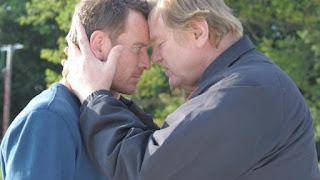 This feature debut from British TV director Adam Smith tells the story of a clan of thieves living in trailers in rural England. Written by Alastair Siddons, the film could have used subtitles to decipher the harsh accents and maybe footnotes to explain the slang. The plot is slight, and somewhat predictable. It's the strength of the cast and their sincerity of their performances that keep it afloat because it's hard to find any empathy for the group of aimless nefarious trouble makers.

The Cutlers and crew live in trailers or "shells" on spot of land like gypsies. They supplement their income by crime and spend their days playing pranks on the cops. Chad Cutler (Michael Fassbender) is the illiterate getaway driver. He's married to Kelly (Lyndsey Marshall) and has a young son and daughter. It's occurring to Chad that his errant lifestyle may not really be in the best interest of his kids who are enrolled in the local school. The leader of the clan, Colby Cutler (Brendon Gleeson) is a religious spouting anarchist who encourages his grandson to disrespect the authorities and the world may be flat. Chad had been arrested a few times, but never charged with anything due to lack of evidence. Chad makes plans to move his family out of their roaming existence and into a real home so the children can become educated. Colby sets a reluctant Chad on a job breaking into a big wigs home, which they crash a car into the house, then set it afire. They are chased again and become national news for their escapades. Chad's dreams of breaking away become more difficult with a price on his head.

The relationship between Chad and Colby is complicated as this is the only life they have ever known. Colby begins to feel Chad's resistance and coupled with the manhunt disrupting their lives. There's some car chases and people flying off the handle at any provocation. The only real emotions come at the end when Chad is able to express his love for his family, maybe finally realizing that his wish for a stable home is just an elusive dream.
(Review by reesa)

Email ThisBlogThis!Share to TwitterShare to FacebookShare to Pinterest
Labels: Trespass Against Us review