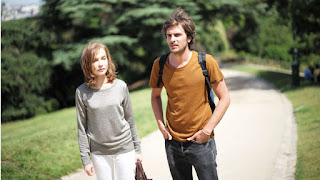 This film was a bit puzzling to me as I didn’t feel as if there was any purpose to it. I didn’t really feel a strong story line as the film was basically mundane to me. The movie follows Nathalie, a philosophy teacher, throughout a pretty trying period of her life. The struggles become more apparent throughout the film and we see the character become disillusioned with what is occurring around her. Isabelle Huppert delivers a great and solid performance as this older woman trying to make sense of what is crumbling around her. She is basically the only aspect or component that keeps this film together.

After the ending, I was almost disappointed and bewildered about why this picture was actually made. There was nothing about the script that created any sort of excitement, major tension, or significant drama that touches people in any way. I was completely underserved by this film. True, one definitely can have empathy and gain meaning from a story like this because many of the events within the story can easily happen. Beyond any sort of distant connection between the hearts of the film viewers and the filmmakers, there was nothing memorable about this project. I felt, as the credits rolled with the final camera focused inside Huppert’s character’s home, a sense of lacking of emotion.

There was an intriguing character of a former student who was basically an anarchist living in a secluded home with several other like-minded individuals. This character’s name is Fabien and he is played by Roman Kolinka. Fabien is someone who is like a comfort cushion or teddy bear for Nathalie. He is almost or is like a good friend although the disparity in their ages is overt. His educated mind which fuels his love for reading and revolution is somewhat engaging to watch.
(Review by Wyatt Head)

Posted by Dallas Movie Screenings at 9:15 AM