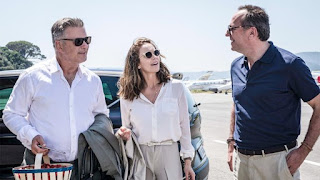 This softly outstanding film follows a woman, Anne, who has been shaded by her husband’s work in a spontaneous adventure through France accompanied by a man named Jacques. The audience follows Anne as she suddenly has a side-by-side journey with her husband’s business partner who she has only known professionally. The journey reveals the true loves and passions that both characters possess. It also allows Anne to finally relax and let go of the highly-scheduled busy life that is beginning to consume her relationship.

One thing that needs to be absolutely stated about this film is that the IMDb rating is a gross underestimate of the quality that this movie represents. It was a fully intoxicating 92 minute film that seemed longer because of its addictive brilliantness. This was a simple rendition of a love story that involved an intimate journey together where feelings carefully develop between two genuine human-beings. Eleanor Coppola, the film’s writer, director, and producer, is ingenious in her execution of the blossoming of love.

People who have affinities for the culinary aspect of the world are thoroughly rewarded by watching this project. Jacques, in his vast knowledge and fantastic taste, takes Anne on an extraordinary sampling of all the beautiful foods that France has to offer. We, as an audience, are exposed to exquisite chocolate desserts, cheeses, and fish among other foods that both of the characters get to consume on screen. The food research work alone for this film had to be extensive in order to produce such wonderful sights.

The script is also clever in how it repeatedly jerks the audience to think that this is all too good to be true and that Jacques is questionable. Alec Baldwin, who plays Michael, Anne’s husband, has a minor role but still conveys his character of a privileged workaholic exceedingly well. He has a great look with abundant class and is also almost continuously on the phone. We see this behavior affect Anne from the beginning and further disconnect her from Michael.

Diane Lane is truly a star in her portrayal of a woman just in need of a breather. She brings a subtlety to Anne that is apparent in her character’s demeanor throughout the film. I would say that this movie is a highly suggestible film for any age old or young. It is a fantastic story about truly enjoying life and all of its numerous gifts.
(Review by Wyatt Head)