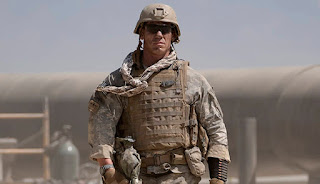 "The Wall"
by Ricky Miller
I wanted to be intrigued with director Doug Liman's "The Wall," but was nlot really that enthralled with the story and structure as a whole.

Aaron Taylor Johnson is Isaac, part of a two-man sniper team sent overseas to investigate an operation somewhere in the Middle East. Although their are no specific instructions given, both he and John Cena's Matthews are the only two souls left in a fight that has seen better days.

"The Wall" is essentially just a character study set beween Aaron Taylor Johnson's Isaac and the voice of Laith Nakli's Nuba, a soldier just doing his job of killing him.

As a director, Liman is alwways hit or miss. His first movie, "Swingers" looked at the life of single struggling actors in Hollywood. That particular entry was mid--1990s (1996) fare that just entertained. On the A-F scale, I would probbably give it a B-. 1999 brought viewers the denizens of a Los Angeles set tale in which viewers were treaded to a young Katie Holmes and a very young Melissa McCarthy, pre TV's "Mike and Molly" days.

Liman scored again with 2014's "The Edge of Tomorrow," aka "Live Die Repeat" which for all intents and purposes was a rehash of "Groundhog Day," but motre exhausting.

This entry also marks an early start for Amazon Studios who just jumped into the movie making world of producing good-looking movies with a cheaoer budget. I think this might mark the fourth release for the independent studio, following last year's Oscar-winniing "Mamnchester By the Sea," which gave supporting actor Casey Affleck his trophy last year and Nicolas Winding Refyn's "The Neon Demon," a tale of misguided models in Los Angeles. Elle Fanning was decent, but the ending just plain disappointed.

"The Wall" does not necessarily satisfy, but it leaves the viewer quenching for more in a flick that does disappoint just a tad.
Grade: B-