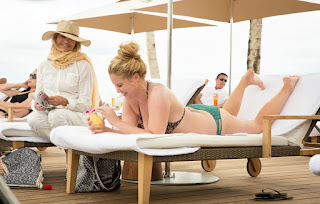 Snatched
Director:
Jonathan Levine
Writer:
Katie Dippold
Cast:
Amy Schumer
Goldie Hawn
Ike Barinholtz
Wanda Sykes
Joan Cusack
Óscar Jaenada
Tom Bateman
Bashir Salahuddin
Christopher Meloni
Randall Park
The irreverent comedy of Amy Schumer is back in theaters for Mother's day and is exactly what I would go see with my mom (but my mom was cool like that). "Snatched" is another brainchild of Katie Dippold (The Heat, Spy). This femme fatale slapstick comedy surrounds a mother and daughter staring Amy Schumer as Emily Middleton a typical slacker chick living with a active social media life, that has just been dumped by her boyfriend Michael played by Randall Park. Seeking refuge from the sting of rejection with her mom Linda played by the classically funny Goldie Hawn. Then unfortunate happens, Emily's trip for 2 to Ecuador is... nonrefundable (duh duh duh *suspenseful music*) and mommy has to go with. Then the duo get into a mess they can't get out of in the jungles of South America and hilarity ensues.

This is the first film in 15 years Goldie Hawn has appeared in. The return of Goldie Hawn to the screen is warmly welcomed, she plays the Abbott to Amy Schumer's Costello. Ike Barinholtz plays the shut-in brother, the back and forth with Bashir Salahuddin's character is so funny. But the parts that really stood out to me was Wanda Sykes and Joan Cusack as Ruth and Barb, they took the cake you can't keep a straight face watching them in this gross out girl comedy. The one part I didn't see coming was Christopher Meloni as Roger Simmons the "Adventurer", seeing him for years as a dramatic actor on "Law and Order: SVU" just tickles me to see him do comedy. Óscar Jaenada as Morgado was awesome because I loved him in "The Losers". Last but not least was the bait Tom Bateman as James he does have a pretty face. The picturesque jungle in the movie was actually filmed in Hawaii. The soundtrack is great with alternative jams from South America like Bomba Estéreo's song "yo soy" that u hear everywhere right now. The movie was fast paced but a lot of funny is packed i a mere 90 minutes so it's a well rounded movie.

Movies like these get a lot of crap, especially Amy Schumer for her type of comedy. I see it like this there is a comedy for everyone if your not a fan of her blue humor then this isn't for you. If your like me and enjoy some adult rated R, laugh your face off, and be in stitches good time, then it is definitely worth the ticket.
(Review by Samantha Leggio)