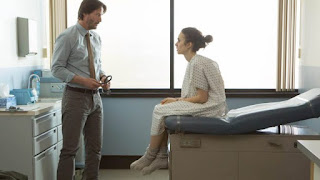 A convincing portrait of anorexia is woven into an otherwise unconvincing tapestry in To the Bone, the semi-autobiographical feature directorial debut of Marti Noxon (who also wrote the screenplay) that exists in some no man’s land between admirable and frustrating. It’s admirable because of the subject matter – a young woman’s eating disorder – and the candor with which Noxon approaches it. It’s frustrating because so much of what surrounds this is melodrama of a middling, often predictable order. There are good forms of manipulation, and then there is piling on the protagonist for the purposes of seeing all sides of suffering.

Noxon’s personal history with anorexia certainly informs her telling of this story, and so, for that matter, does the shared history of Lily Collins, who quite effectively plays the young woman in question. Her name is Ellen, although it does not stay that way for the entire movie. She is, indeed, anorexic, only biting into and chewing food before spitting it out onto a napkin. She is remarkably thin, and having returned from inpatient treatment to a tense home (We never see her father, the maternal figure in the household is her stepmother, and her biological mother left years ago, after a mental breakdown), the impulse not to swallow becomes stronger.

Her birth mother Judy (Lili Taylor) came out late in life after a short affair with her then-best friend Olive (Brooke Smith) and cut herself off. Her stepmother Susan (Carrie Preston), whom Ellen insists is not her mother, desperately searches for new answers, and her stepsister Kelly (Liana Liberato) vocalizes sadness that barely masks contempt for Ellen’s non-eating habits. The only viable option for intervention comes in the form of William Beckham (Keanu Reeves), an unconventional doctor whose institution is predicated upon an honest and open confrontation of the psychology behind eating disorders.

His two colleagues (played by Alanna Ubach and Retta) hold weekly counsel with all patients in the institution (housed in, well, a house, which has no doors as a form of accountability) and observe daily behavioral changes, however small. The patients are mostly interchangeable, except for the lone male of the group, Luke (Alex Sharp), an eccentric, English-accented fellow who cheers on everyone else while concealing his own deep troubles and a terrible knee, and Pearl (Maya Eshet), who conceals by retreating into her collection of stuffed animals.

The film doesn’t quite fall into the trap of retreating too deeply into the tragedy of these other characters, but it does distract itself often with a halfhearted romance between Ellen, who later takes on the moniker of “Eli” because of the archaic nature of her real name, and Luke (The two share a silly dinner at a restaurant, conniving an order of alcohol from the waitress by playing a sympathy card) that never feels convincing. The result often feels like a soap-opera account of the gravity of eating disorders. Everything feels calculated and contrived in To the Bone, a well-meaning but familiar issues drama with half the conviction it needs.
(Review by Joel Copling)

Email ThisBlogThis!Share to TwitterShare to FacebookShare to Pinterest
Labels: Joel Copling, To The Bone review