War of the Planet of the Apes 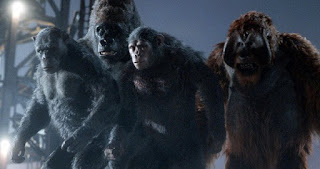 The last of the current trilogy in the new Planet of the Apes series may be the most satisfying of them all. Thus said, it will probably not be the last. Matt Reeves who directed the first Dawn of the Planet of the Apes is back with co-screenwriter Mark Bomback as they close out the story of the ape leader Caesar. The story follows an unknown span of time after the Rise of the Planet of the Apes in their battle with the humans and Caesar's murderous rival Kobu. The peace loving Caesar and his tribe of simians live in the deep forest hiding from the humans who are determined to wipe them out.

Andy Serkis is digitally transformed into Caesar who must save his followers from extinction when they are attacked by humans. A family tragedy forces him to go after the authoritarian human leader Colonel McCullough (Woody Harrelson), while he sends the rest of the group to safety. His close friends and advisers, refuse to let him go alone. Along the way they encounter a mute young girl Nova (Amiah Miller) who Maurice (Karin Konoval), a wise and benevolent Bornean orangutan, adopts as a daughter. Trying to locate the human camp, they meet former zoo chimpanzee who is hiding out at a desolate ski resort who calls himself "Bad Ape" (Steve Zahn). "Bad Ape" is sure to be a trending catch phrase on meme's and T Shirts. Eager to please, he also is strong on self preservation and not very happy leading the party to the human fortress. They find out more humans are expected to arrive soon. Caesar discovers that his tribe, including his son Cornelius (Devyn Dalton), had been captured by McCullough's army and forced to work building a wall. Caesar is captured and confronts the Colonel who rules his troops with a religious fervor. Humans are losing their capacity to speak due to the virus that caused the apes to make their evolutionary leap. McCullough is racing against the clock until the remaining humans are infected. The ensuing battle, escape, and retribution is exciting and inevitable.

Director Reeves has claimed many elements of other films referenced from Spartacus, Apocalypse Now, The Outlaw Josey Wales, The Ten Commandments, The Great Escape and The Bridge of Over the River Kwai. The action is well paced allowing for characters to be fleshed out with memorable moments. The close up digitally enhanced shots of the simians creates a sympathetic view of their plight, meanwhile the humans look more like faceless Stormtroopers. Only Gabriel Chavarria as Preacher, who Caesar had let live after the attack on the apes camp, shows conflicting moments of conscious in the face of Caesar's torture by The Colonel. Obviously the message being that humans in their self righteous battle to survive at the expense of other living creatures is their own path to destruction. We empathize for the simians who are more human than the humans. In the broader scope of the current political climate, the movie is a reminder that we should be embracing and supporting our differences whether it be race, faith, gender, and in this movie's case, inter-species. We need to survive together or we will be screaming like Charlton Heston's famous line in the 1968 Planet of the Apes, "YOU MANIAC! YOU BLEW IT UP! AH, DAMN YOU! GOD DAMN YOU ALL TO HELL!!"
(Review by reesa)

Email ThisBlogThis!Share to TwitterShare to FacebookShare to Pinterest
Labels: War of the Planet of the Apes review