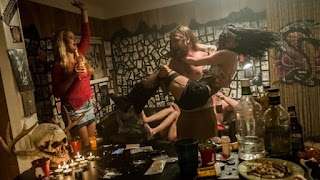 68 KILL
** (out of ****)
Pulp fiction of the below-the-belt variety, 68 Kill features characters who are supremely unlikable, and that seems about right. It’s a movie, written and directed by Trent Haaga and based on the novel by Bryan Smith, that ultimately places our characters’ moral compasses on about the same level as each other. The so-called hero is thus no better than the villains by the time he’s making his quick getaway, and it only takes a savage amount of senseless violence to bring us to that point of intended catharsis. That is not a problem in itself. The problem, then, is the degree to which we dislike the hero.

Chip (Matthew Gray Gubler, fine for what he’s given, which isn’t much) is introduced to us as the pathetic man-toy for Liza (AnnaLynne McCord), a dominatrix in and out of the sheets. Their throes of passion have duped the man into believing that he loves her, and then, over the course of a particularly eventful night, he doubts that conviction. This might be the specific thing about Chip that ingratiates the audience to the character, but the length of time it takes for him to come to this realization (almost the length of the entire night, basically) makes it impossible to feel even the remotest sympathy beyond fleeting pity.

That’s because Liza, a sex worker written as an impossibly judgmental shrew, concocts a plan to steal $68,000 from one of her clients. That plan inevitably turns on its ear when she kills the man and his wife upon her and Chip’s arrival at their lavish place of residence. As they are about to leave with the money, a hostage situation develops, as another of the client’s potential conquests, a scantily-clad young woman named Violet (Alisha Boe), stumbles upon their bodies. Chip, after noticing Violet’s appealing figure (a real charmer, this one), attempts to help her, but Liza decides in favor of kidnap.

From here, the innocent sweetness of what came before (Please note the sarcasm dripping from those words) turns decidedly toward ugliness, even as the points of the zigzagging plot manage to become more interesting. The film is not merely about extended kidnap but about subverting one’s expectations of that plot as it enters and exits each act. The first act is the robbery-cum-abduction. The second act features Violet’s turn to have her way with Chip, a relationship that bears its own form of seductive/sadistic control. The third act, which disposes almost completely of both previous subplots, regards the sadomasochistic behavior of a seeming innocent in a gas station clerk named Monica (Sheila Vand).

That third act is both the strongest, in clarity of vision and in the performance from Vand (whose menace matches well with a cold, clever gaze that never falters), and the most problematic, in that it sums up, in an opposite-of-graceful way, the film’s regressive view of its female characters and its hero. Chip fears and despises these women, and so does the movie. Its vitriol passes for humor, especially as Chip escapes this nightmarish circle of hell into which the women he hates placed him, and that vitriol is what separates the displeasure of watching 68 Kill from the enjoyable grindhouse pleasures for which it is aiming.
(Review by Joel Copling)