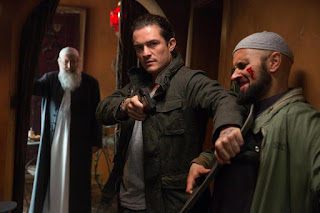 Unlocked is one of those “for a while” thrillers, for which one must always provide the caveat after voicing praise. It is, for a while, an intelligent thriller, but Peter O’Brien’s screenplay drops the ball in the third act by embracing the clichés of the Talking Killer and the Shocking Betrayal (not in that order). It does, for a while, rely on the competent staging of its action sequences, but director Michael Apted has less certainty in handling the maneuvering of the pieces of its jigsaw plot. I suppose that also makes the film one of those frustrating experiences for which the conjunction “but” is constantly necessary.

We get the requisite action heroine in Alice Racine (Noomi Rapace), whose limited character history makes her shell-shocked in the present: An interrogation in her past went awry when the planned and coordinated attack on a major city left 12 people dead. The incident forced her into retirement from field duty, at least until she is called in to help with preventing a biological threat. The major incident that jumpstarts the plot involves a twist that is a bit tricky to duck around, although let’s say that Racine is brought in to interrogate a suspect and that the investigation doesn’t last very long.

In any case, Racine goes on the run from the C.I.A., where her division chief (played by John Malkovich, literally phoning in his performance for most of his scenes) scrambles to keep up with the ensuing chaos, and into the sanctuary of her mentor Eric Lasch (Michael Douglas, who unfortunately gets no scenes with Malkovich). Of course, that respite is brief, too, and then we get too much time between Racine and Jack Alcott (Orlando Bloom), a burglar with apparent military training whose entire existence is to be either a red herring or a blessing in disguise, until he simply disappears entirely.

Yes, this is one of those thrillers wherein anyone could be a turncoat. We have no reason to trust anyone in this cast of supporting characters, and O’Brien shifts between each of them with an equal amount of suspicion before resting, seemingly after performing a certain counting rhyme, upon the most obvious of the lot. It’s enough to beg the question of when a screenwriter will choose the character that his audience will not suspect by any stretch of the imagination. It doesn’t happen here, and although the culprit’s identity should be concealed in a review, let us only say that it is apparent from much earlier than the screenwriter and Apted believe.

The film’s opening act provides just enough tension (in the character of Alice Racine and in the initial details of the threat) and a solid performance from Rapace (who conveys the heroine’s increasing aloofness with a bit of sadness in there somewhere) that the film is a bit better than the previous paragraphs make it seem, if only because there is a serviceably engaging thriller here, struggling to break free. And then, like clockwork, Unlocked falls into the routine of providing suspicious supporting players, some generic shootouts, and that blasted variation on the Talking Killer – or, perhaps more accurately, the Talking Biological Terrorist.
(Review by Joel Copling)