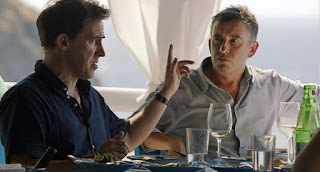 Steve Coogan and Rob Brydon star in this high-energy dramedy that follows two old friends through a journey into Spain. The film is filled with impressions that these friends excel at which makes the story significantly entertaining to watch. Steve, the character played by Coogan himself, is going through a career-crisis in his middle-age. His personal life is also at stress with questionable practices in his romance. Rob, the character played by Brydon himself, is sort of thriving with an unceasing happiness and talent combined with a phenomenal sense of humor. He also has two adorable young children and a loving relationship with his wife.


This film thoroughly engages the audience the entire time with exciting exchanges between the two that involves an almost overfilled humor. They travel on a ferry into Spain to embark on a culinary extravaganza at posh and modern restaurants where the food is tantalizingly delicious. There are gorgeous chorizos, shellfish, and other items that fill the story with delight. This film, however, focuses more on the inner tensions that Steve is going through while his career is taking a dip. His agent drops him close to the beginning of the film and he is having trouble with executing a project the way he would like to. The story excels at exploring the tightening contrast between this glorious trip and the simultaneous notion to Steve that he is not in a good place.


Rob, like mentioned before, is almost the illuminating life at the party or shall we say table. He is perfectly content with where he is and is completely enjoying his lovely time with his pal in another country. In terms of impressions, there are brilliant ones performed by both friends such as ones of Michael Caine, Mick Jagger, Marlon Brando, and others. This is one of the major ways that we see Steve and Rob communicate with one another in their shared passion.


The drama in this film takes a surprising role as we enter further into the journey. One thing I absolutely appreciated about this movie was that it illustrated that even famous individuals can deal with stressful circumstances. Steve is a thoroughly accomplished actor who doesn’t forget that he was in the film Philomena, which got nominated for the Academy Awards. Nonetheless, he is subjected to the negative changes going on for him professionally in the plot of the film.

If one would like to get their comedic tooth satisfied, this is a one-time job type of movie. Just be prepared for a little bit of darkness representing life struggles.
(Review by Wyatt Head)

Email ThisBlogThis!Share to TwitterShare to FacebookShare to Pinterest
Labels: The Trip to Spain review, Wyatt Head