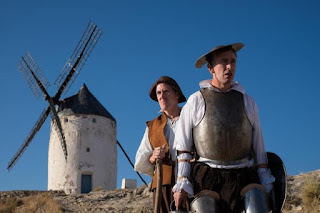 The Trip was a 2010 British television sitcom series that was edited into a feature film, as well as the second season, The Trip to Italy in 2014, and this year's Trip to Spain. Directed by Michael Winterbottom, it follows the adventures of Steve Coogan and Rob Bryton, basically playing fictionalized versions of themselves that they created for the 2004 film, A Cock and Bull Story also directed by Winterbottom. It's a bit of aimless situations while the men improvise impersonations as they travel around the countryside and dine at glorious restaurants.

Coogan is the more successful of the two friends with a writing and acting career. While Bryton is well known for his Man in a Box skit that everyone loved and thought it was the funniest thing in the world. Not much has changed from the last two movies, except for them getting older. Both men contemplate their aging trying to convince themselves they are in the prime of their lives. Coogan, who is bolstered from getting an nomination for a screenwriting Oscar, finds the script he is shopping is a go, but is going to be rewritten by another young hot writer. Meanwhile his young married girlfriend has bad news for him, and his son who was supposed to meet him in Spain has some personal drama. Bryton is more of a stay at home dad to two little ones and jumps at the chance to travel with all expenses paid by the magazines. Coogan is contemplating writing a book of his travels, but is too distracted by his U.S. manager who leaves the agency and doesn't bring him along. Of course, it gets complicated when Bryton gets a call from the manager who wants him to sign on with him.

The British Observer and the New York Times which are commissioning the trip and story ask the duo to pose as Don Quixote and Sancho Panza at a photo shoot during the trip. You can guess who gets to be Don Quixote.

The food looks amazing as you can watch the kitchens preparing these delectable and tiny courses. Of course you have no idea what they are, but they sure look good. The two visit various famous architecture in their travels while discussing random histories of the area. All the while they are riffing on each other singing and doing impersonations. Some are pretty loud while they are eating and amazingly they other diners are not wondering about them. A trip to Spain has to include the Monty Python skit of the Spanish Inquisition as done by Marlon Brando.

It's funny watching them critique each other's impersonations. While it seems a stretch to take a TV series and cut it into feature length films that doesn't really have a plot, car chases, or death and destruction. It just makes one want to join them for a bite and giggle while they do Sean Connery and John Hurt.
(Review by reesa)

Email ThisBlogThis!Share to TwitterShare to FacebookShare to Pinterest
Labels: The Trip to Spain review