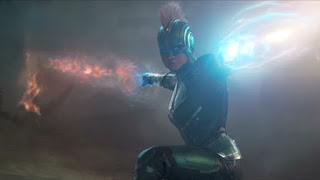 The film is set in the early 1990s when Blockbuster Video was still a flourishing American neighborhood video rental franchise.

It contains a deluge of inside jokes that only the most discerning viewers will understand. For instance, the tabby cat named “Goose,” is named after one of the leads from 1986’s blockbuster, “Top Gun.”

Also woven into the storyline are glances at another space-involved flick when Danvers glances at a video box cover of Philip Kaufman’s “The Right Stuff,” an Oscar-winner flick that was very popular in the early 1980s when the home rental market was booming.

Mind you, streaming services were not popular then. As a matter of fact, they did not even exist!

Samuel L. Jackson’s Nick Fury returns to the Marvel universe. Jackson been a fixture since his first appearance at the end of Jon Favreau’s “Iron Man” in 2008. The filmmakers digitally manipulate his character in “Captain Marvel” to make him look a tad bit younger.

The sets for “Captain Marvel” are very realistic. The Blockbuster location had in-store promotional items, including a standee of Arnold Schwarzenegger from the film “True Lies,” one of the last rentals to grace the video store shelves.

So readers know, prior to my work as Entertainment Editor with the Chronicle, I spent years managing an independently owned video store in Plano, Texas (American Video). I think “True Lies” was one of the last titles I rented to customers back in the day when customer service was part of my daily activities.

Also of note is that “Captain Marvel” will return to the big screen sooner than fans may expect. She will have a significant role in “Avengers: Endgame,” set to grace screens in less than a month. April 26 to be exact.

Like I’ve said in the past, I cannot give away too much without spoiling it for others. “Captain Marvel” keeps the Marvel brand intact and delivers in virtually every single department.

For all intents and purposes, the film is a giant flashback. It centers on Danvers, who has dreams that she cannot recall and considers them bits of past memory from long ago. In order to maintain her balance, she spars with Jude Law’s Yori Rogg, a friend and ally with whom she confides her problems and predicaments.

This flick is just fun. It delves into the childhood memories from the 1980s and 1990s, all the while knowing its limitations in reality.
“Captain Marvel” is worth the full-price of admission. Just be forewarned to stay for the credits. There are two Easter eggs at the very end.


Grade: B+
(Review by Ricky Miller)