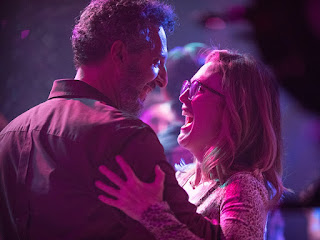 Sebastián Lelio won an Academy Award for Best Foreign Film in 2018 for his film A Fantastic Woman. His newest project which he wrote and directed had it's world premiere at the Toronto International Film Festival last September. It's almost a scene by scene remake in English of his 2013 film Gloria in which Paulina García won the best actress prize at the Berlin Film Festival.

Julianne Moore plays the fifty something free spirit Gloria Bell. She's been divorced for a dozen years and works for an insurance company. At night she frequents a dance club for the disco dancing mid-life crowd. When we first see Gloria she is sitting alone at the bar. She is not someone that particularly stands out. Even when she approaches someone who she had met in the past, he can barely remember her. We follow Gloria in the everyday minutiae of her life. From her singing alone with the radio in the car of 70's dance music, to smoke breaks with a co-worker while complaining about the job. She visits her children, her son (Michael Cera), a new dad who has been left with the baby as his wife had taken off to find herself, and her daughter (Alanna Ubach), who teaches Yoga and has fallen for a Norwegian surfer. As much as she offers to help them, they insist on living their own lives. She also gets along with her ex-husband (Brad Garrett) and his wife (Jeanne Tripplehorn). They share friends with Rita Wilson and Chris Mulkey. It's not a bad life, just very routine and unadventurous.

One night at the dance club she hooks up with Arnold (John Turturro). He's been divorced for about a year but is still very much involved with his ex-wife and two grown daughters who call him at every opportunity to help them out. Despite the early signs of this, Gloria and Arnold get along. Gloria revels in that exciting feelings of new love. They date, meet her friends and her kids, but he keeps getting phone calls and disappearing on her. They even try having a Las Vegas weekend which ends up with Gloria doing a morning walk of shame.

Julianne Moore is probably one of top actresses in the industry today. She can anything from playing the quirky villain in the last Kingsman film to this quiet sensitive performance of Gloria who lives for everyone else but herself. There is no CGI, car chases, shootouts or ghosts. This is a nice quiet performance of a woman finding her self and independence. There can be good stories of older women and hopefully we will see more. It's a slow start, but it's the kind of story that stays with you.
(Review by reesa)