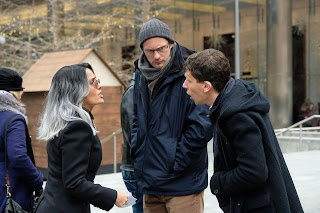 Writer / director Kim Nguyen takes on the world of high-frequency trading with his newest film, “The Hummingbird Project.” Nguyen’s movie follows two traders, Vincent (Jesse Eisenberg) and Anton (Alexander Skarsgård), who decide to quit their jobs at a high-profile firm in order to build a run of fiber optic cable – which must be placed in a perfectly straight line – between the stock exchange in Kansas City and New York City.

Vincent and Anton, who happen to be cousins, bring in an investor, Bryan Taylor (Frank Schorpion), to finance the project and a driller, Mark Vega (Michael Mando), to help with the construction. As the group sets out to work on the project, with hopes of beating Vincent and Anton’s former boss Eva Torres (Salma Hayek) with a faster connection (only 16 milliseconds instead of 17), it becomes obvious that they are in over their heads. A whirlwind of sub-contracts, non-disclosure agreements (NDAs), property sales (they only ask each owner for a thin strip ten feet underneath their property), and equipment rentals (among other things) ensues. All of which costs ridiculous sums of money. Sums that quickly escalate with the arrival of each new problem.

Eisenberg plays yet another variant of his typical role – the smooth-talking arrogant hustler. He’s done it before but he plays the part well. Pairing the character with the neurotic Anton gives “The Hummingbird Project” its edge. Skarsgård, playing against his usual type, completely disappears into the role of the anxiety riddled, middle-aged Anton. It’s a transformation that requires the actor to walk hunched over with a funky gait and appear with a balding pate while also embodying the personality of someone who is extremely intelligent yet easily riled up. Eisenberg and Skarsgård have excellent chemistry, giving the cousins a believable dynamic.

Ex-boss Torres quickly catches on to what her former employees are up to (despite their NDAs) after sending someone to spy on them. Quickly, she hatches a plan to be the first to a faster connection, finding ways to undermine Vincent and Anton’s work. She pays particular attention to messing with the easily manipulated Anton. Hayek plays the part well. She coolly and venomously delivers her lines, making Eva a great (and oddly likeable) villain.

For the most part, the movie is finely paced. Nguyen sprinkles moments of humor throughout to help keep the movie light, in spite of the heavier topics it touches on (stomach cancer). There are some moments where things start to drag but they don’t last too long. The score from Yves Gourmeur, one of the more engaging scores from recent memory, creates the right mood for the film and helps to build the suspense and drive the story along.

While “The Hummingbird Project” focuses on some dense (and, at times, dark) material, it’s a fun, breezy thriller. After finishing the movie, it’s a little hard to believe that this isn’t based on a true story.
(Review by Bret Oswald)