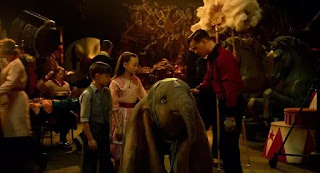 Talk about unnecessary, n but for some unknown reason, the mighty mouse (Disney studios) has nothing but live action updates for the next couple of years.

As a matter of fact, live action versions of both “Aladdin” (with the powerhouse casting of Will Smith as the blue genie) and “The Lion King” are set for release in summer of 2019.

But, we’re here to talk about ”Dumbo,” the Tim Burton- directed tale of a flying elephant who gets ostracized from everyone in involved in his circus’s troupe.

Even emcee Michael Duffer gets a chance to trade in his usual tagline of “Let’s get ready to rumble” for something involving “Dumbo.”

Director Tim Burton has worked with Michael Keaton has worked with before, in 1988’s “Beetlejuice” 1989’s “Batman” and 1992’s ”Batman Returns.” Finally, Burton is back to his form with his penchant for whimsical set pieces and scenes wherein his mind runs all over the place. It really shows when Dumbo looks at floating bubbles that are the shape of various elephants floating in the open air sky above.

Keaton has played the villain role before in “Pacific Heights” as well as “Desperate Measures,” both giant letdowns on his resume.

She was the lead in his amazing and inventive “Miss Peregrine’s Home for Peculiar Children” in 2016. I liked that movie quite a bit since it made my end of the year ten best list in 2016.

In “Dumbo,” she is Colette, a circus performer and trapeze artist who spent time with Keaton’s wealthy investor V.A. Vandervere. Vandevere is essentially a grifter, a con artist of sorts only in it for the short gain. He does not care for the life of the animals, just as a way to make a buck for his own selfish gains and interests.

“Dumbo” works because it takes from the original tale and adds enough diversity to make it just a bit different than the original story.

It takes some ideas and liberties from the original tale but makes it work for modern times and sensibilities. Even though it is set in 1940s middle America.

Colin Farrell is great as Holt Farmer, a soldier who lost an arm in the midst of fighting in the Great War overseas. His wife passed away while he was gone, so the entire circus troupe served as a sort of surrogate family for his kids.

Later on in the story is Alan Arkin as J. Griffin Remington, an investor who wants to see the elephant fly as anyone and everyone in the public. He befriends Danny Devito’s Max Medici and offers to buy him a hot dog.

I wanted to dislike this movie, but I had such a good time with it I was still smiling when the end credits start to roll. Although not a masterpiece, “Dumbo” still works as a stand alone flick in the great Disney tradition.