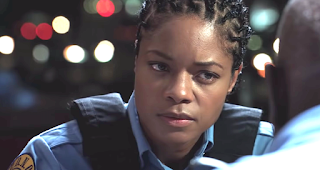 In “Black and Blue,” director Deon Taylor’s second thriller of the year, rookie cop Alicia West (Naomie Harris) finds herself in over her head after she agrees to work a double shift in place of her partner, Kevin (Reid Scott), when she witnesses a group of corrupt cops, led by detective Terry Malone (Frank Grillo), commit murder – their actions caught on her body cam. Of course, this fact is quickly identified by the perpetrators and makes her a target for the group. The majority of the movie focuses on their pursuit of Alicia. Malone and his men give her two options - hand over the camera and join their side or die.

Alicia is a shrewd, level-headed officer. She’s more interested in using her badge as a way to make a positive difference in the world rather than abusing its power. Injured by gunshot before she can gather herself and unwilling to turn against her morals by joining Malone’s ranks, Alicia attempts to return the camera to the precinct where the footage can be downloaded to the department’s computers, outing her dishonest coworkers. Desperate and met by continuous opposition, she turns to an old friend, Milo (Tyrese Gibson), for help.

Screenwriter Peter A. Dowling’s script is on the predictable side. There’s not much to say about this movie because it gives you exactly what it advertises – a straightforward thriller. All of the obvious twists and turns are present. The movie moves exactly in the direction you expect it to go. There are no surprises. It’s abundantly clear who is good and who is bad and viewers can probably guess the way in which this film will end.

Yet, despite the script’s predictability, Taylor’s movie works. There’s a good sense of pacing. Taylor and Dowling clearly lay out all the pieces of the narrative within the first fifteen minutes – characters’ personalities, Alicia’s status within the department, the way the body cams work, and how their functionality becomes an obstacle for the leading lady – before moving into the main storyline. What really hinders this film is some questionable acting, bad dialogue, and its general air of “been there done that.”

Taylor’s lame thriller “The Intruder” was released earlier this year. It was ridiculous and ill-conceived in every way, “Black and Blue” is definitely a marked improvement over that mess. While the movie is far from perfect, it’s serviceable enough for a recommendation. Viewers who go in expecting some cheap thrills will probably enjoy themselves.
(Review by Bret Oswald)