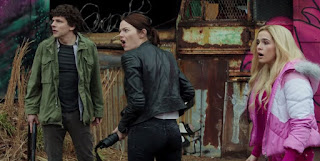 “Zombieland” skillfully combined the horror and comedy genres, pairing tongue-in-cheek humor with gore-filled action pieces. The movie was a hit, making it surprising that it's taken ten years for a sequel to materialize. Unfortunately, “Zombieland: Double Tap” is the type of follow-up that tries too hard to replicate the viewing experience of its predecessor. In short, “Double Tap” presents more of the same.

The sequel once again brings together the creative forces behind the original movie - director Ruben Fleischer, screenwriters Rhett Reese and Paul Wernick (who also worked with Dave Callaham on this script), and stars Woody Harrelson, Jesse Eisenberg, Emma Stone, and Abigail Breslin. Unfortunately, they don’t manage to once again capture lightning in a bottle. The jokes here feel forced with the majority of them coming across as strained attempts at recapturing the mood and energy that made the first movie so much fun to watch. Despite its brief runtime, "Double Tap" is a film that seems to run a little too long – not good for a ninety-minute movie.

In the decade since the zombies started overrunning the world, Tallahassee (Harrelson), Columbus (Eisenberg), Wichita (Stone), and Little Rock (Breslin) have grown into a functioning family unit, deciding to settle down - in the White House - instead of running around the country. At the same time, the zombies have begun to adapt, some becoming dumber and others becoming smarter and more aggressive.

Shortly into the movie, Wichita and Little Rock decide they have had enough of Tallahassee and Columbus. Tallahassee has become an overbearing father figure to Little Rock and Columbus wants his relationship with Wichita to get a little too serious. The women take Tallahassee's beloved custom ride, telling the guys of their departure through a sorry excuse for a letter (acknowledged by Wichita) and hit the road. Wichita returns minus Little Rock, who has run off to Graceland with her hippie-type love interest, Berkeley (Avan Jogia), and Tallahassee's car. The group goes in pursuit.

The cast comfortably refills their characters' shoes, character relationships at least seem natural but things feel unexplainably off. The rhythm and flow that made the original movie work are missing. Jokes are rehashed before one of the characters calls out their age and staleness - neither the old or the new joke eliciting a laugh. How disappointing. This really was one I had high hopes for.

Despite all the negative comments, there are some good things going on in this movie. The writers add in some new characters, most notably airheaded bimbo Madison (Zoey Deutch). Her stupidity and ill-fitting cheery demeanor are constantly mocked by the rest of the cast. Deutch continues to prove what a versatile actress she is, showing her range in a role unlike her others. Although her character is (purposefully) annoying, her scenes are the best parts of the movie. There's an energy present when her character is onscreen that’s absent from the rest of the movie.

There are some decent action pieces too. The best involves another pair of zombie-slayers, played by Luke Wilson and Thomas Middleditch whose characters bear an uncanny resemblance to Harrelson and Eisenberg's. Joined by Nevada (Rosario Dawson), the group defends themselves from some recently turned zombies as the camera gracefully glides around the set, a hotel (where Nevada lives) made to look like Graceland.

The positive aspects, however, do little to improve the movie. It’s all a little stale. "Zombieland: Double Tap" is a far cry from the original.
(Review by Bret Oswald)