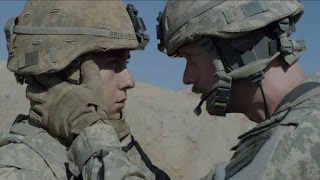 THE KILL TEAM
** (out of ****)
The Kill Team doesn’t really say anything we did not already know about war. We all know it’s hell, considering the sentiment is a common phrase, and Dan Krauss’s movie, a narrative approach to material the writer/director covered in the 2014 documentary of the same name (unseen by me), can only hammer in the point. The true story on which this one is based is the kind of compelling, increasingly tragic stuff that tends to come out of the fog of war. Despite a worthy performance from its main actor, Krauss’s handling of that story in this format falls short in some important ways.

From the start, the film seems in a hurry to get to the main point of its story. The early segments, then, struggle to introduce us to its players in a way that does not come across as unintentionally jokey. We meet Andrew Briggman (Nat Wolff), a fresh military recruit who joins a group led by Staff Sergeant Wallace (Tunji Kasim). Right off the bat, we recognize the personalities here – not because they are distinctive (only the staff sergeant, undeniably in charge, has a personality that isn’t putting on a loud and masculine show) but because they are recognizable as men stuck in a cycle of combat and insulation.

This is all fine, especially because Wolff’s performance is strong in the way the actor’s eyes are constantly surveying what is in front of him, the gears clearly working in his brain. When Wallace is killed in a freak explosion, Andrew and his fellow soldiers (played by Adam Long, Jonathan Whitesell, Brian Marc, and Osy Ikhile) meet the replacement, Deeks (Alexander Skarsgård, whose valiant attempt to bring this character to life is undermined by his clear uncertainty how to afford the man any extra layers), who assures them that he has no intention to “replace” their old leader. He certainly has a different approach, though, in that he apparently feigns a buddy-buddy relationship strategy, while harboring some truly sadistic techniques to keep his men in line.

The key scene, which has one of the privates killing an insurgent who was apparently going to blow them all up, is played out with just the right amount of queasy tension. That carries through the second act, in which Andrew, noticing some discrepancies in the official report of the incident, leaves an anonymous tip with the criminal investigation division that sets the other men on edge. The third act, in which another of Andrew’s split-second decisions has irreversible consequences, feels more dutiful than suspenseful, though. There is less of the queasy tension that came before, and at under an hour and a half, Krauss doesn’t have much time to cover a lot of the loaded, ironic events of the story. The Kill Team weaves a stranger-than-fiction tale, and that may very well be why a narrativization of its events falls short. This telling simply comes across as one in a rush to get the bitter end.
(Review by Joel Copling)

Posted by Dallas Movie Screenings at 8:40 AM