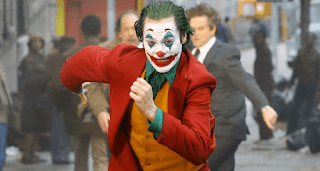 I do not where to talk about this movie without giving too much away. “Joker,” from director Todd Phillips is part of the DC extended universe. It delves into an altered reality wherein Bruce Wayne’s parents are ambushed after leaving a movie theater that was showing “Blow Out,” a great John Travolta led Brian De Palma movie that still kept him on the A list of celebrity.

“Joker” also offers a flipside to Martin Scorsese’s masterpiece “King of Comedy” (1982). In that gem, Robert De Niro was Rupert Pupkin, a terrible stand-up comedian who stalks Jerry Lewis’s Perry Langford. It was not high on a lot of best of the year lists, nut Scorsese was the prestigious Palm d’Or award as a nominee. Paul D. Zinneman, however won an award at the BAFTA’s for best screenplay.

“Joker” also deals with mental illness and the act that it is a story about misplaced youth and coming to find out about one’s past as an orphan. He loves his mother Penny (Frances Conroy), and comes to find out she is mentally unstable and spent time at Arkham Assylum, a mental institution in the city of Gotham, where “Joker” takes place.

Phoenix’s Arthur Fleck even carries a card remarking on his cackling and laughter as a way of showing that he has a disease. Some fellow passengers shrug it off while others bully him.

A major inside joke occurs when Phoenix’s Arthur Fleck sports a yellow cloak a la “The Village,” (2004) a part he played in M. Night Shyamalan’s aforementioned tale.

As I said earlier in my review, I cannot give away too much without spoiling it for the viewer. As a director, Todd Phillips probably has his biggest budgeted titles under his belt. I’m sure after “The Hangover” trilogy, as well as “Starsky and Hutch” (2004). He knows when to lighten the load in spots while all the while offers some brutal scenes and displays of violence.

“Joker” delivers the goods in a big way. I am not sure where this will end up in their library. So readers know, Margot Robbie reprises her Harley Quinn role in “Birds of Prey” next year. It comes out Feb. 7 of next year, 2020 to be exact. The full title is “Birds of Prey: And The Fantabulous Emancipation of One Harley Quinn.”

Be warned: this is not like the Christopher Nolan Joker Heath Ledger won the Oscar for. It is just a different take on the twisted clown with a differing personality.