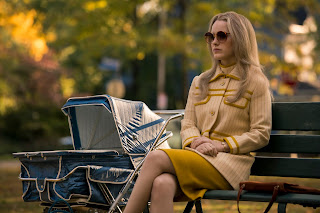 Crime and drama films being put together sounds extremely intense and completely new for my viewing experiences, especially when it comes to seeing a film at the movie theater or at home. Director Julia Hart comes in as the director of the film, featuring The Marvelous Mrs. Maisel star Rachel Brosnahan in her leading, meatier role and Arinzé Kene.

The film takes place in the 1970s where crime and drama have existed in people’s eyes and minds. Here, a woman named Jean who is forced to go on the run after her husband Eddie betrays his partners, sending her and her baby on a perilous journey.

Rachel Brosnahan portrays a lady named Jean who is a mother of her baby and a wife to Eddie. Brosnahan knows how to act out as a strong mom on every step and direction as the director Hart would want. Brosnahan, under Hart’s guidance, really provided some dramatic performances that nearly landed on her Oscar-contender section as she knows how to deal with these situations in real life to reflect on other people. British actor Arinzé Kene also steps on Brosnahan’s side as Cal who helps Jean on her journey.

Hart, after the directing chores from Miss Stevens, Fast Color, and Disney+’s Stargirl, uses her talent and experience to film this cynical feature film that explores the concerns about the woman and her baby in her breath-taking, near-fatal experience that opens the mind-blowing imagination to both the cast and the crew’s journey through the streets outside of their homes. Hart uses several camera angles, focusing on Brosnahan’s character and her slowly-pacing scenes, giving some proper “suspense” effect on her character and the baby scenes as well. Hart even created some crafty scary, suspenseful images on the film entirely and towards Brosnahan’s scenes, taking higher advantages of a R-Rated crime-thriller film.

What can be enjoyable is the chemistry between Kene and Brosnahan compared to the film Far From Heaven starring Julianne Moore and Dennis Haybert, with Dennis Quaid as a supportive husband to Moore’s character. Kene and Brosnahan can maybe be a great couple together, but in the end, it sounds like they just enjoyed working with each other and having the time of their lives.

Though, the downsides of the film are mainly the slow pacing on the writing and editing coming from Julia Hart and her husband Jordan Horowitz, the scarred focus on the Brosnahan’s character and the baby, giving her a powerful feel of being damsel-in-distress nature, having the husband character getting a small screen time, and the baby in the a thriller, which seems a bit dangerous to have, even on the set.

Despite the downfalls, I’m Your Woman is an okay movie. It clocks in two hours to see how their experiences would judge beneath their skills. Rachel Brosnahan really nailed it out of the ambulance, but I feel like the cast and the crew overdone just to make this film as good as anyone’s, trying to reach its Oscar-worthy level to that account.