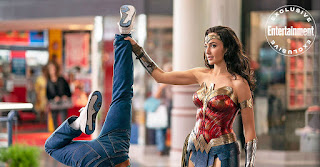 Wonder Woman 1984 offers a fiery, fist of pain and glory!

After a few rounds of theatrical delays, Warner Bros. heavily made a hard decision to release this film in theaters and on HBO Max at the same date and time. Though this doesn’t mean that movie theaters will be gone forever, sometimes movies can be convenient and enjoyable at home for others who are afraid of going out during this pandemic. But fear not, let’s hope that 2021 gets better and brighter than ever. Patty Jenkins returns to helm the sequel while Gal Gadot reprises her role as Diana Prince/Wonder Woman, the titular character in the film alongside Chris Pine, Kristen Wiig, Pedro Pascal, Robin Wright, and Connie Nielsen in their supportive roles.

Wonder Woman 1984 takes place in 1984 just decades after World War I (the first film) and centers on Diana Prince, along with her former lover Steve Trevor, who is on a mission to battle against her newly found foes, Maxwell Lord and Barbara Minerva/Cheetah.

Gal Gadot returns to the onscreen sequel as Diana Prince (Wonder Woman) while the returning Chris Pine (Star Trek Into Darkness) appears as Steve Trevor. Robin Wright and Connie Nielsen also return to reprise their roles as Antiope and Hippolyta, the aunt and the mother to the titular superhero. Newcomers Kirsten Wiig (Despicable Me films, How to Train Your Dragon trilogy) and Pedro Pascal (Disney+ The Mandalorian) arrive in the scene as a small archaeologist-turned-villain Barbara Minerva, who dastardly revealed to be Cheetah, and the glamorous businessman Maxwell Lord respectively.

Patty Jenkins, having directed the first film, utilized her experiences to produce a sequel that gives a stronger, meatier characteristic role for Gadot to take on to her long journey after World War I. Jenkins even strolls down to memory lane by putting down the old 1980s vibes for that sake of the plot and the setting which bring the viewers to reminiscent of those times and memories that have been cherished in the 1980s where video games, television, and even movie stores became popular during those times, engendering the sparkling bright lights to people’s minds and eyes as they grew up. 1980s also sets in the Cold War, which is very interesting to see.

And what a wonderful way to give nice, subtle bonus points for the film is the cameo appearance of Lynda Carter, the actress who portrayed Wonder Woman in the 1970s television series, which gives the film a breezy, catchy surprise for that old-school 80s setting.

The narrative of the film is a lot bigger than is shown in the trailer. They are bruises and pieces that need to be put together to create one huge, prestigious, narrative flick. Though, the main disappointment is the lack of magic and faith for the film’s main narrative structures as well as giving Gadot's character a [somewhat] weaker characterized tone. Aside from that, parts of the plot seem very fitting to guide the viewers but there’s a lot of nonsense coming from the steady focus on Gadot and Pine’s chemistry as well as the battling chemistry between hers and Maxwell Lord character compared to the first film when she encountered Sir Patrick Morgan/Ares (portrayed by David Thewlis), revealing his true colors.

While it certainly didn't live up to the ridiculous hype, Wonder Woman 1984 is still a grand spectacle that satisfied my cravings for a cinematic experience. I would say it’s an okay movie that lies between “magnificent” and “disappointment.” I admire and respect the visuals, the music composition coming from Hans Zimmer himself, and the exhilarating experience the director and Gadot have offered this year, but the lack of emotional touches and bits of weakened plotlines left me untouched. And that is all I’m going to say about it, and since the film is going to be released in theaters and on HBO Max altogether, I can’t give any more details until you see it.

Just to let the viewers know that the film is about 2.5 hours long so you might want to pick a good time and date to view it.