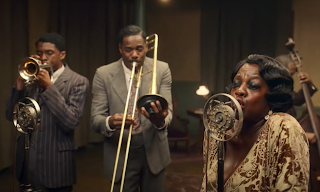 People often say any film is boring, but some people have changed their thoughts on the last minute. For Ma Rainey's Black Bottom, it’s one of those films to watch for those who are feeling excited and frisky this year. Ma Rainey's Black Bottom is directed by theater arts playwright George C. Wolfe and is written by Ruben Santiago-Hudson, based on the inspirational play of the same name by August Wilson. Produced by Denzel Washington, Todd Black, and Dany Wolf, the film stars Viola Davis and Chadwick Boseman in their leading roles, with Glynn Turman, Colman Domingo, and Michael Potts in their supporting roles.

Taking place in Chicago in 1927, Ma Rainey's Black Bottom focuses on the rising tensions in between Ma Rainey and her ambitious horn player Levee Green, under the white management determined to control the uncontrollable "Mother of the Blues,” a name adopted by Ma Riney herself.

This film serves as Chadwick Boseman’s final feature film. He died suddenly on August 28th, 2020 due to an epic battle of colon cancer during the film’s production, leaving the fans, filmmakers, and celebrities devastated at this news. His acting credits include 42 and Marshall, before entering his breakout role in the MCU film Black Panther released in 2018, leading Boseman to become the first black actor to have a main, headlining role in a MCU film.

Wolfe, an experienced Broadway director, has utilized his theater-directing experiences to film every scene and shot centering on the music group, Davis’ character, and the chemistry between Davis and Boseman. Even when all the stress comes based on his steady story-creating job, the music insertion for the film, the gritty writing, and the focus shots of the camera angles facing towards actors as opposed to theater stages, Wolfe knows how to craft a film that becomes a musical production number as if anybody is going to see a play at the performing arts theater.

The performances coming from Viola Davis and Chadwick Boseman in their leading roles are very easy to follow. They both know how to portray a character based on the written play and know the pros and cons between acting in the film and the play. Davis provides a confident but similar technique on how drama films work in any direction rather than her own action films she ever starred in. Not just acting, but she serves as Boseman’s acting mentor on how to amp up the scene and the character development of his Levee Green character. Her onscreen chemistry with Boseman is really what makes the film easy to guide the viewers. Speaking of which, Davis also appeared in Fences (directed by Denzel Washington who serves as a producer for this film) for which she has won her Academy Award for Best Supporting Actress for her role.

However, my main downside for this film is that there’s a lot of bad language coming through those characters, which prevented me from seeing this too easily. It felt like the writers were trying to bridge on advancing themes of the racial violence and the 1920s setting before the Great Depression came to rise. The accuracy of the film based on the play and its setting just keeps getting weirder and wilder. But above all, the film and the actors’ performances provide some outstanding moments of history, the music, the class, and the culture which are very well recalled, well presented, and preserved.

Overall, Ma Rainey's Black Bottom is an excellent movie that excels on the plot, the characters and the main points of the setting. Davis and Boseman really nailed it. I kinda say, this film is a must as the film serves as a “thumbs-up” for the film, mainly Boseman who makes this film enjoyable and pleasant to see. The cast and crew did a great job on the film, serving as a memorial tribute to Boseman. I have to say this, this film is top notch at being nominated in such glamorous Academy Award categories, particularly Boseman for that Best Actor role for 2020. This is absolutely one of the best films I ever watched in 2020, I’m putting this on my top ten of the year.