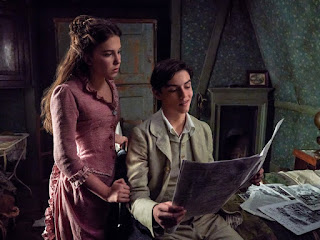 Any movie that can make me smile when just thinking about it receives high marks in my book.

Such is the case with the Netflix produced “Enola Holmes,” which traces the Sherlock Holmes family lineage to a younger sister, Enola (Millie Bobby Brown), (“Stranger Things,” , “Godzilla: King of the Monsters” (2019)) who has a penchant for solving mysteries and the like.

Throw in Helena Bonham Carter (“A Room With a View” and “The King’s Speech”) who disappears one day out of the blue thus making mysteries afoot.

“Enola Holmes” occurs in the middle part of the nineteenth century, so their are no references to modern technology to get kids involved with. I hate to make another “Scooby Doo” reference because that is not what occurs here.

So readers know, Enola’s name is a palindrome, one where the letters can be mushed up and spell alone, hence part of the gimmick of the title.

That is also another plus to this story, since the family has a lot of letters in their home. Think of a bunch of Scrabble pieces that are strewn about in the living room to their residence.

There is also a lot of fourth wall breaking, since Enola talks directly to the viewer about her situation and predicaments. She even mentions that she doesn’t know how to embroiderer, something most teen girls were taught when they were younger.

Early on in the story, she even goes to meet brother Sherlock (Henry Cavill, “Man of Steel”) and Mycroft (Sam Claflin, “The Hunger Games: Catching Fire,” “Me Before You”) at the train station to rendezvous for the latest aforementioned predicament. Enola does not wear gloves or a hat because the hat makes her head itch.

Directing “Enola Holmes” is Harry Bradbeer, who recently won a plethora of Emmy awards for his work on “Fleabag” a British TV show that also does a lot of fourth wall breaking as well. Co-creator and lead Phoebe Waller-Bridge has a wit and sense that make her character very watchable I this tale, kind of like what Bobby Brown does here.

Part of what occurs in the plot is a lot of nonsense in that they want to make Enola something she is not. Both Sherlock and Mynecroft think they will do better for her if she follows the straight and narrow both by trying to get her to assimilate in modern society.

Sardonic tone and stride are present throughout her characters’ viewing of the world. Life should be a place to just enjoy oneself regardless of the events that occur.

I am not sure how this thing is doing ratings wise on Netflix, but I would like to see farther incarnations of this tale since it is a universe all unto itself.

Grade: A
Review by Ricky Miller