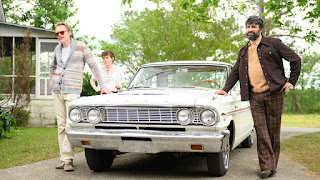 Uncle Frank is not just a drama film, but it’s also a road-trip movie that strolls down into memory lane. The film was screened at the Sundance Film Festival just before the virus hits the earth. Director Alan Ball, known for writing a screenplay for 1999’s American Beauty that later granted him an Oscar for Best Original Screenplay as well as creating huge-hit television sitcoms Six Feet Under and True Blood, takes the lead as the director of this film, featuring the main stars of Paul Bethany, Sophie Lillis and Peter Macdissi.

Uncle Frank focuses on Frank Bledsoe and his 18-year-old niece Beth whom they take a road trip from Manhattan to Creekville, South Carolina for the family patriarch's funeral, they are unexpectedly joined by Frank's lover Wally. After hearing the news about the death of his father, Frank is forced to reluctantly return home for the funeral to finally face a long-buried trauma that he has spent his entire adult life running away from.

Paul Bethany, the fame in Marvel Cinematic Universe films, portrays the titular character Uncle Frank, the literature professor living in New York while actress Sophie Lillis appears as his niece Beth. Actor Peter Macdissi comes in as Frank’s longtime partner Walid "Wally" Nadeem, an arrangement that he has kept secret for years to avoid revealing the truth to his entire family.

Bethany really gives a truly memorable performance and it is really emotional, the film focuses on how living this secret life has affected him and how even though he is intelligent, it doesn't change the fact that he is scared about living his life. He is very charismatic and charming and just leads the screen very well here. Same words go for Sophie Lillis and Peter Macdissi who serve as his past memories that deeply affected him.

The cast of actors portraying Frank’s family also appear in the film: Steve Zahn as Frank’s brother Mike Bledsoe, Judy Greer as Kitty Bledsoe, Mike’s wife and Frank’s sister-in-law, Margo Martindale and Stephen Root as Frank’s mother and as Frank’s father with the latter disapproving Frank's relationship with another person in the same gender, and Lois Smith as Frank’s aunt. The cast of the actors did an amazing job and gave them something to add on the film’s structure components.

Ball’s direction really tones the voices based on how well his story of this film is well-put together, even when some writings coming from him have some good dialogue, it has a lot of drama and emotion and actually produces some pretty funny moments which helped the flow of the film, but as mentioned there are some forced moments that pretty much comes by weaker writing, that disrupts the flow of the film at times. Ball really makes the film so unique to watch as this deals with many important subjects and themes, it is a film about acceptance and understanding people which is very well done. Ball and his team really know how humans can be dark and depressing at anytimes when it comes to learning and accepting one’s way, which is why humans live in a cold, cruel world today.

Overall, Uncle Frank is a very good, interesting movie to see. I really enjoyed the film as much as anyone else could, it tells some important messages that makes people understand a little better and makes the acting and the story pace so worthy to see both at home and in theaters. This film is worth a watch for anyone, whether you’re a fan or not, this is a film anybody is interested in when it comes to good, moral stories being told by someone.