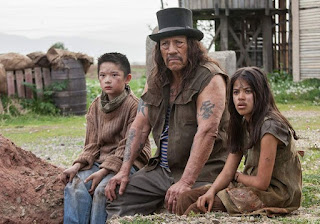 Bullets of Justice is one of the darkest, scariest films to watch this season, giving the fact that Halloween is just around the counter. Bulgarian director Valeri Milev, who is known for directing Re-Kill in 2015, flew over to Eastern Europe and somewhere in Central Asia to take the role as the main film director for this horrorous, post-apocalyptic feature film with Timur Turisbekov coming aboard as the producer and an actor with Danny Trejo also starring onscreen.

The film takes place in the era called the Third World War where the American government has initiated a secret project code that creates super soldiers by inbreeding human beings with pigs. 25 years later a breed called "Muzzles" occupied the top of the food chain, eating and farming humans like animals. The film also centers on Rob Justice who is an ex-bounty hunter working for the last line of human resistance, which actually consists of a group of survivors hiding in a nuclear bunker deep underground. His mission is to find out how muzzles came to power and destroy them.

Valeri Milev and producer Timur Turisbekov, with the latter acting in the film as the ex-bounty hunter named Rob Justice, have filmed the entire scenes, the film itself, and action sequences in Kazakhstan, which is a transcontinental country mainly located in Central Asia with a smaller portion west of the Ural in Eastern Europe. The two also took some inspirations from several zombie films and other post-apocalyptic films in order to match the style, the depth, and the characters’ performances, even when it means going through tons of bloody CGI-usages and sexual appeals on the characters, both real and robotic in the scenes.

Not only the direction, but the killer-shooting meltdowns add some putrid effects on those disturbing pig scenes. What is more horrifying is the music in the background, which bears a striking resemblance to that old-school Hitchcock’s persona just to give the film some vitamins for its strength and some structural tones for the film’s central atmosphere. And lastly, to make matters worse, Trejo’s screentime is cut short in order for the filmmakers to focus on other characters, thereby, going against the criteria from that movie poster and trailer.

I hate to say this, but Bullets of Justice is the worst film I ever watched. Though only Trejo’s scenes are what makes the film enjoyable to see. I really wish Danny Trejo has more screentime as said in the poster of this film, but sadly, the filmmakers have really focused on other scenes and characters more than focusing on Trejo. And that’s all I’m going to say, I feel like their movie skills are beneath them. This is one huge mess of a film that hurts to watch, truly painful. You will never kick yourself for passing on this one.