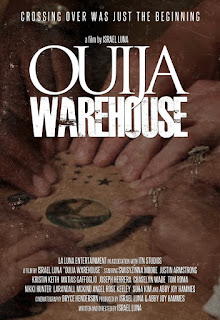 As Halloween is just around the corner, they are a plethora of scary, horrifying films to be offered in theaters or at home via digital streaming service. This film is made locally and was heavily consist of several of my colleagues who have worked on this project called Ouija Warehouse directed by Israel Luna during the pandemic. The film features the cast of Kristin Keith, Joseph Herrera, Abby Joy, Suha Kim, Swisyzanna, Justin Armstrong, Chaselyn Wade, and Angel Rose Keeley.

Ouija Warehouse centers on the group of friends who discovered the spiritual game board at the warehouse where they are gathered for the birthday party. However, one of the two party-goes accidentally set the spirit free by playing it, forcing them to solve the case of this spirit that died in the warehouse just a year before the events of the film.

Actors Joseph Herrera and Suha Kim played key roles as Noah and Kay who are responsible for releasing a deadly spirit after they found the spirit game board in the room and started playing with it. Kristin Keith came along in the scene as Elaine who is busy setting up a party in the warehouse. Also appearing are Swisyzanna, Justin Armstrong (who also serves as an executive producer), and Chaselyn Wade. And finally, Angel Rose Keeley comes in as Isabella, the spirit that rises into the room.

Due to the pandemic, the film was shot entirely in one location with less than seven days to work on those scenes, editing, and acting out in the film. The crew have spent so much time finding a decent storyline down the road as well as focusing on the character developments for Joseph Herrera, Kristin Keith, Chaselyn Wade, and Suha Kim in which they represent an old-school survival challenge compared to the A Quiet Place and other scary films that have something to do with survival. The crew even throw in some special effects for that horror-graphic flavor for the film, but in turn, the plot seems manageable for audiences to look directly into. Though, the downside is not adding little more special/visual effects to keep it classy.

Ouija Warehouse has just enough satisfying twists and turns to keep one’s interest come in handy. My main challenge is picking a scary film to watch can be tough, but for my advice, see the trailer first and voice your thoughts honestly. My last theater experience is The Hunt, which was released earlier this year before the pandemic begins.

With the colors and the flavors present, Ouija Warehouse is a pretty good 86-minute (almost 90) indie-feature film. I feel like this film is safe lubricant for teens and maybe older kids. The film gives me lots of laughs and shocks along the way throughout the film. The director, the cast, and the crew did an amazing job of keeping the paces behind their backs. And that’s all I’m going to say, I can’t give out too much. I rather watch this again when it comes out on digital. Lastly, just to let the readers know that most of my colleagues have worked on and appeared in this film.