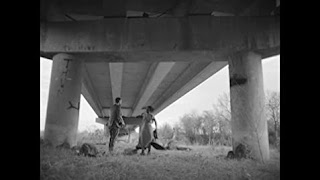 This film feels like this one is made in the 1920’s or 1930s due to the looks of the film, possibly giving steady captures and tones from The Wizard of Oz adventure. Fugitive Dreams is based on the play of the same name by Caridad Svich. Director Jason Neulander takes the helm of producing Fugitive Dreams that weaves a wandering tale of homelessness, addiction and mental illness in a dream-like depiction of rural parts of America.

Fugitive Dreams opens and centers heavily on Mary (April Matthis) who is wandering through empty fields, aimlessly walking towards a city limits sign, which is actually middle of nowhere with no signs of habitation anywhere else, before finding refuge in an abandoned petrol station bathroom. She is later about to press down when John (Robbie Tann) bursts in and shocks her from the moment of self-harm.

Under Neulander’s direction, the film is shot in black and white and this gives Mary and John’s travels a stark beauty, a clear juxtaposition that allows the anyone who watches this film, mainly some, to truly capture some extraordinary, yet stunning images of the empty American countryside, giving some historical references from the segregation era due to the settings and the tones of the film for that accuracy. Though as the film progresses midway, colour of the scenes have been switched to return to the modern world that looks like the setting takes place in the present day, which lost its beauty and narrative for the film’s structure integrity.

April Matthis and Robbie Tann played as Mary and John, the two homeless folks who are in desperate need of finding shelter somewhere in the countryside in America. Also appearing are Scott Shepherd and O-Lan Jones who played the mother-and-son duo of Israfel and Providence in the film, supporting the main two actors onscreen.

As the film deeply explores the beauty and the naturalness of the characters and the settings, the scenes in the colour world (parts of the second half of the film) did not capture the blink of the eye for the gloriousness for how the film will find their way to beautyness, much to the film’s detriment. The colour scenes really lost their flavor on how the story aims for the decent storytelling and for the reasonable plotlines which nearly felt that the director is very off-topic to make the film itself to be more compatible to any road-trip movies anyone has ever watched. But on the bright side, the plot and the main focus on Mary and John really adds a nice touch for their chemistry, which is part of the film’s climax.

On the side note, Fugitive Dreams is a fascinating 95-minute feature presentation. It may or not be as enjoyable as any other balck-and-white drama, road trip movies. but I say this film is a really interesting story to tell that fights and flies beneath the surface. This film is a must for any first timers out there.