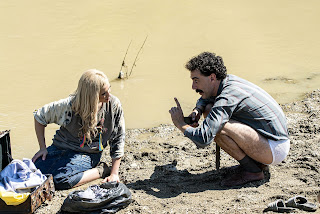 Borat Subsequent Moviefilm serves as the official, direct sequel to this critical acclaim film, Borat: Cultural Learnings of America for Make Benefit Glorious Nation of Kazakhstan, which was released in 2006. Although, no word of the sequel hasn’t been official to the public yet until the news came in the mid-2020s. The sequel is directed by feature-film first-timer Jason Woliner, though he had a background on television as he was directing some television episodes from several television sitcoms, including Parks and Recreation. The film’s cast consists of Cohen who reprises his role as Borat Sagdiyev and Maria Bakalova in her supporting role on Cohen’s side.

Sacha Baron Cohen reprises his role as journalist/reporter from the first Borat film. Despite that pandemic is still spreading, he uses his advantages to start filming but in a secretive manner out of sight. Cohen gives his character and persona more comedy, more vitamins, and some hilarious tactics in order to received bonus points and making the film as enjoyable, possibly making it brighter and better than that lazy-and-lousy Dumb and Dumber sequel. Taking a stand on Cohen's side, Maria Bakalova appears in the film as Tutar, the daughter of Borat Sagdiyev.

The setting of the film takes place during the COVID-19 pandemic as the some events happening in Hollywood are referenced during the film which made the viewers to believe that the film was made and set somewhere in the world during this time. Woliner, Cohen, and the crew took much of their time traveling and shooting multiple film scenes day-in and day-out right after the stay-at-order was lifted. Although Borat Subsequent Moviefilm is a mockumentary, comedy film, Cohen also threw in some father-and-daughter scenes together to give it more proper, structural family dynamics and whimsical tones for that chemistry between those two and the film as a whole.

Even though there are more films and titles to come, I say Borat Subsequent Moviefilm is one of the greats for house-viewing activity, though only for teens and adults due to its disturbing contents. The sequel threw in several loads of laughs, bruises, and amusements for this 96-minute feature. The director and Cohen really made this comedy classic all possible as means of spreading joy during the pandemic. And that’s all I’m going to say, I can’t give out too much, you’ll have to see it for yourself if you love Borat and Sacha Baron Cohen so much. So please watch Borat Subsequent Moviefilm if you can!

Bonus points for that Tom Hanks cameo in the film.