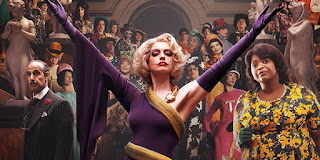 Originally tended to be released in theaters, Warner Bros. and HBO have officially decided to release this film digitally on television through the latter's own streaming system called HBO Max. Based on Ronald Dahl's book released in 1983, The Witches serves as the second full-length feature film to be adapted from that book, the first was that classic cult released in 1990 with Anjelica Huston starring in it. Famed director Robert Zemeckis (Forrest Gump, Back to the Future, Who Framed Roger Rabbit?) returns to the director’s chair to produce this dark, comedy film on HBO Max. The film features the stars of Anne Hathaway, Octavia Spencer, and Stanley Tucci, with Chris Rock narrating the film.

The film talks about an imaginative tale of a seven year old boy who lives with his grandmother and has a run in with some real life witches, including the Grand High Witch, at the hotel just before he was turned into a mouse. He later overhears the witches' plan to turn children into rodents and it is up to him to foil their evil schemes.

Anne Hathaway portrays the Grand High Witch, the main witch who is responsible for turning children into animals, while Jahzir Kadeem Bruno plays as a young boy, the main protagonist of the film, who is turned into a mouse by the Grand High Witch while comedian Chris Rock does the voiceover for Bruno’s character and primarily serves as the film’s narrator. In addition, Octavia Spencer appears as the supportive grandmother to the young boy whilst Stanley Tucci came into the scene as the hotel’s manager named Mr. Stringer. And lastly, Kristin Chenoweth also appears as the voice of Daisy, another mouse who was once a human girl named Mary who was turned into a mouse by the witches before the film takes place.

Utilizing his experiences from his directing duties in 1992’s Death Becomes Her and 2007’s Beowulf, Zemeckis and his team have used a bucket load of CGI on the mice Hathaway’s character, with the addition of special effects that are mainly focused and aimed on Hathaway entirely throughout the film. Not only, he and the crew have guided Hathaway’s onscreen performance throughout the film, but also gave Spencer’s and Bruno’s character a fine mother-and-son relationship chemistry in order to give the film some much needed lovable amusement for the audiences regardless of the genre.

Though, there've been some downfalls on the film where Zemeckis and the filmmakers overdid compared to his (Zemeckis’) own films, predominantly his recent films. He has taken deep advantages in focusing on two things: the scrawny CGI effects and unglamourous Cats-style visual effects. Those two things really bring up the much more scarier tone like the classic one dated back in 1990. Even when the crew have planted a subtle plot and the lazy script-writing, turns out it wasn’t as imaginable as ever like how Ronald Dahl would want when his books got made into films. Not only that, but the mice and witches scenes are the most frustrating things to watch because it feels like it could've been made by somebody else, though Hathaway and Spencer’s performance are pretty flawless to follow, which makes the film too enjoyable to watch.

In conclusion, The Witches is a god-awful, disappointing 104-minute movie. I honestly don’t know why they chose to remake the first one which was great and all for both critics and audiences. I feel like the special effects are just too much and have taken over the movie compared to that junky, musical Cats film released in 2019. I hate to say this, but don't watch this and don’t waste your time on this one... enjoy the first one again instead.