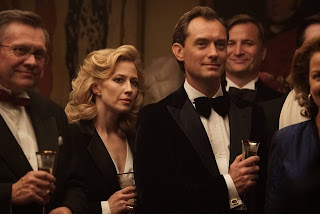 For starters, the title of the film brings a good definition of a “bird leaving their nest” symbol, giving me time to think about how anyone moving to another city or country would change and impact their entire life when it comes to learning about “out with the old, in with the new” meaning. It’s a similar structure like seeing their own grown children go off to college or seeing a man move to another city or state for a new career role. This film is directed and produced by the second-timer Sean Durkin who recently helmed Martha Marcy May Marlene starring Elizabeth Olsen. The Nest stars Jude Law (Warner Bros.’ Sherlock Holmes, Marvel’s Captain Marvel) and Carrie Coon (HBO's The Leftovers, FX’s Fargo) in their leading roles while Charlie Shotwell, Oona Roche, and Adeel Akhtar (Murdered by My Father) have been casted as supportive actors in the film.

The Nest centers on a man named Rory O’Hara whose plans on moving his family to England for his new job role over there, though the biggest problem for his family is that they have concerns on how to accumulate themselves with the England lifestyle as their uncertainty upon relocation from America to England has lead them to the intense isolation of their new home that affects them differently and entirely.

Taking up his directing tips and tricks up his sleeves, Durkin captures the enduring family scenes that makes an impactful film that brings the entirely unsettling story that can be easily centered and resolved on a dysfunctional family with the most difficult choices and emotions that affects their behavior with huge amounts of struggles and dealing with darker times as they are forced to live a new life from going to that “same-old, same-old” nature, giving a feel of an empty-nest syndrome, which is something that carries the film and the characters’ structure dynamics. Durkin and the crew have worked the cast simultaneously on handing things properly on how to adapt a new and different life and perspective from place to place.

Aside from the direction and the pace of the story, the music sounds very flattering on that England setting, compared to the American settings in the film at the very start. Even when the actor Jude Law has done a smartful job on keeping in character as both a father and a husband, which deals with real-life situations on how any father or husband would do anything for their family, even when it means getting jobs just to get paid handsomely. Jude Law and Carrie Coon really know the basics of being a husband and wife to each other.

Though, my huge disappointments are the lack of laughs and comedy being missing in the background as well as children using bad language as an rewarding opportunity for that R-Rating film. My viewing pleasures don’t find it very pleasing and enhancing. Though, the plot is very manageable to follow.

Also appearing in the film are Adeel Akhtar as Steve, Rory’s co-worker while Michael Culkin as Arthur Davis, Rory’s boss and supervisor. And for that short onscreen appearance, actress Anne Reid (BBC’s The Mother, Wallace and Gromit’s A Close Shave!) appears as Rory's mother.

With that being said, The Nest is a really good movie, if not better. The director and the crew really outdone it. Jude Law, Carrie Coon, Charlie Shotwell, and Oona Roche did a great job of keeping the pace of the story and their characters in the palm of their hands. I say this film is great for any families out there who have been struggling a lot of times, but deep down, there’s hope to come if you choose this. I really like this film, but I can’t go higher than that regardless.