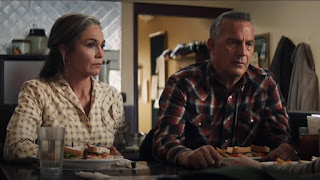 Let Him Go is the rightful choice to have!

At first, Let Him Go is heavily believed to be a Western, modern film, but it’s actually a crime thriller and sorta like a coming-of-age movie for grownups and adults who expect such greater things after reviewing the trailer and the poster itself. Thomas Bezucha takes the role as the director and producer of this feature film based on the novel written by Larry Watson. Academy Award winners Diane Lane and Kevin Costner have been given a large role as the main pair of protagonists in the film whilst Kayli Carter and Lesley Mansville received a supportive character role.

In the film, upon the death of their son, a retired sheriff named George and his wife Margaret fight to rescue their widowed daughter in-law and young grandson from a dangerous, dysfunctional family through the streets in North Dakota.

Kevin Costner and Diane Lane, whom they both worked together in Man of Steel, appear throughout the film as George and Margaret living in the countryside in Montana with Kayli Carter portraying Lorna, their son’s now-widowed wife after her husband’s death. Will Brittain steps into the scene as Donnie Weboy, Lorna’s abusive husband with Jeffrey Donovan portraying as Bill, one of Donnie’s family relatives. And lastly, the legendary English actress Lesley Mansville arrives as the mother of Donnie.

Also appearing is Booboo Stewart (The Twilight Saga, X-Men: Days of the Future Past, Disney’s Descendants) as Peter, the Indian horseman George and Margaret meet.

Bezucha gives all the fuzzes, the energy, and the fuses when he and the crew build a large scenery in the countryside to treat the film like a modern, Western film taking place in the 1950s and 1960s for that film’s ordinary textures to fit the Drama and Western genre. He even brought some Michael Giacchino’s scoring pieces to give the film some proper boost to follow the guidelines on crafty thriller production line and to match the personas for both Costner and Lane’s characters together along with Carter’s motherly character.

One of the main focus of the film is the chemistry between Kevin Costner and Diane Lane’s characters, which is also part of the film’s structural dynamics when it comes to acting out as a family couple, a similar output and tasty amusements like the filmmakers did from Warner Bros.’ Man of Steel, the first film of what is called DC Extended universe, co-starring Henry Cavill and Amy Adams.

Though what can be scary is the number of violences that appear almost at the end that shocks and shrieks right out of my ears and can flip both myself and the adult audiences out of the edge of their seats. Another thing is the director and crew went extremely overboard on the much-violent, not-so bright, unglamorous Weboy family characters.

In conclusion, Let Him Go is a great movie. It is a must see when it opens in theaters and on digital. Not only the director plays the cards well but Kevin Costner and Diane Lane are what makes the film very interesting to see. I would give best bets on the entire cast and crew who made it all possible. Just to let the viewers know that the film clocks around roughly 114 minutes for that feature time length, so if you’re planning on seeing a two-hour presentation, I say watch this. You’ll be fascinated by the fantasies of “countryside vs. city” life.