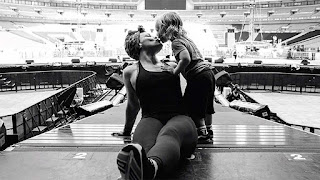 Movies are something that makes people happy and so does music. P!NK: All I Know so Far focuses on real-life figure P!nk, whose real name is Alecia Beth Moore, takes her beloved fans and music-loving audiences on her journey to her 2019 world tour “Beautiful Trauma.” Joined by her family, she tries to balance her time as a mother to her kids and a performer. By using archive footage along the way on the road, behind-the-scenes interviews, and personal materials, musician P!nk and director Michael Gracey gives the fans and audiences a tourly-glimpse behind the scenes and curtain of the musical circus and career that she called life.

This documentary feature film serves as Michael Gracey’s second film as director after taking directorial duties from The Greatest Showman, featuring Hugh Jackman and Zac Efron. Before being a director, he was a visual effects artist and a digital compositor for various films. As director, Gracey did a great job organizing the footage and scenes with her family in order to see P!nk’s balancing life for her career and her family, which is something lots of actors and celebrities have been doing all day just like real busy people like us. In terms of family dynamics, Gracey and P!nk know what are the aspects in life when it comes to keeping one’s head on anyone’s job role and the role as a family member to someone.

P!nk serves as the narrator to her story, explaining her key role as a mother to her children. Her life as a musician and a family member became her own cultural impact that teaches lots of people about the concerns and hardcores of following one’s passion and loving friends and family everyday. She is something people can get to understand when it all comes down to any career every person needs to focus on, but in truth, families come first. With the messages about one’s career and life, P!nk brings a powerful message lots of people need to know and to engage for that consideration when people, including myself, view them as celebrities, they know what they are and who they are. The lesson is these people may be famous, but they are also busy people like us.

P!NK: All I Know so Far is an ok documentary film, it clocks to at least a hundred minutes. As a viewer for documentary films, I was heavily blown away to discover several documentary movies that explain the real-life crisis of celebrities. Although, I'm not a huge fan of documentary feature films, but I think the director and P!nk did an outstanding job on crafting this masterpiece whether or not this film will achieve remarkable success, though some scenes can be filled with boredom. I really wish this film was screened in theaters as this deserves a theatrical release, but sadly, it’s going to be on Amazon Prime instead.

Email ThisBlogThis!Share to TwitterShare to FacebookShare to Pinterest
Labels: Henry Pham, P!NK: All I Know So Far review