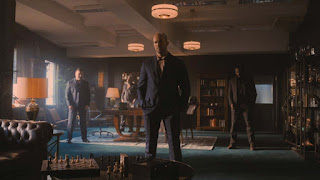 Wrath of Man is another old-school gangster flick.

If you folks read my review for the 2020 film The Gentlemen (starring Matthew McConaughey), which was published last year, then you will know lots of people have chills on seeing how British gangster movies can have a huge impact on the whole world and to the movie industries. Based on the 2004 French film Cash Truck by Nicolas Boukhrief, visionary director Guy Ritchie returns as a money-making gangster movie director to helm this interesting action flick. The film features the consisting cast of Jason Statham, Holt McCallany, Jeffrey Donovan, Josh Hartnett, Laz Alonso, Raúl Castillo, DeObia Oparei, Eddie Marsan, and Scott Eastwood.

Wrath of Man follows the story of a main character named H who is hired by a cash truck company responsible for moving hundreds of millions of dollars around Los Angeles each week. While completing a task, the truck gets held up at gunpoint, forcing H to single-handedly deal with the robbers, showcasing his advanced combat skills and training.

The main star in this tale is English actor Jason Statham (Transporter trilogy, The Expendables, Fast & Furious series). Statham portrays H, a cold and mysterious stranger who becomes a new employee being hired by a cash truck company. This marks the fourth time Statham collaborated with director Ritchie after they previously worked on Lock, Stock and Two Smoking Barrels, Snatch, and Revolver.

Sticking with the lower budget roots, the directing chores for Wrath of Man have been handled by Guy Ritchie. He was famously involved in the retooling Sherlock Holmes film, starring Robert Downey Jr. and Jude Law. His resume also heads on over to 2015’s The Man From U.N.C.L.E film, which was a remake of a 1960 spy series, the Disney remake of Aladdin, and his most recent film, The Gentlemen. For this film, Ritchie, known for making crime action thriller films, utilizes his experience by lecturing the actors and crew to build up a good stage play on how any ordinary gangster flick works. He also uses the law-and-order for the sake of the plot, the characters, and the story arcs while meeting the action-movie criteria. Of course, this may seem challenging for both actors and producers because of the excessive action sequences, gunpoint directions, and some cat-and-mouse chasing that needs to be rehearsed.

Focusing on the downsides, parts of the plot are a bit hard to follow due to non-linear structures coming from the cast and crew, having no comic relief though bits of dry humor is shown throughout the some scenes, and the characters given some non-kindly hearted dialogue followed by a plethora of some slick quotes given by Ritchie, Ivan Atkinson, and Marn Davies.

Though, the acting and the atmosphere are great, though the storyline needs work just to make the film easier to enjoy. The acting levels are a pretty tedious work for the actors, including Statham, but they look like they are just having fun in their character parts while following the director’s orders.

Speaking of acting, the gang's all here in this movie. We have Holt McCallany (Netflix’s Mindhunter) as Bullet, Jeffrey Donovan (USA Network’s Burn Notice) as Jackson, Josh Hartnett (ABC’s Cracker) as Boy Sweat Dave, Laz Alonso (Avatar, Fast & Furious) as Carlos, Raúl Castillo (HBO’s Looking) as Sam, DeObia Oparei (Pirates of the Caribbean: On Stranger Tides, 2019’s Dumbo) as Brad, Eddie Marsan (Happy-Go-Lucky) as Terry, and Scott Eastwood (The Fate of the Furious) as Jan. With Eastwood onboard, this marks the second time Statham and Eastwood have collaborated with each other after The Fate of the Furious.

Another surprise coming in this film is the cameo appearance of American rapper Post Malone.

Although it’s not a great movie by any means, Wrath of Man does an adequate job of keeping the viewer entertained for a brief spell. It clocks in at exactly two hours straight. What matters is that Richie never disappoints anyone for this film as he has done the swaggiest job on keeping the characters in position as well as guiding the actors and crew throughout the film based on his crime-action movie directing professionalism at all times and costs. Wrath of Man may not be top notch for Ritchie, but it’s a top-class crime thriller fare that will please the diehards out there.