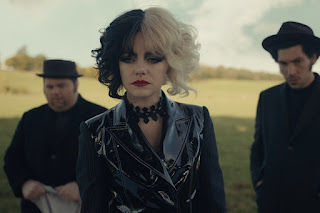 Keep your dogs away, Cruella has her first laugh as the protagonist.

This film and Joker set the stage on turning any darker movie villains into colorful main protagonists with strong, heavy origins of their perspective lifetime of a story or book. It’s impossible to unsee the villain’s refreshing take, but it’s going to be anticipated from the taste of seeing bad guys being carried over as either actual heroes or anti-heroes. Based on the 1956 novel written by Dodie Smith and Walt Disney's 1961 animated film One Hundred and One Dalmatians, Craig Gillespie takes leadership role as the leading director of this film while Emma Stone stars in her titular role as Cruella, along with actors Emma Thompson, Joel Fry, Paul Walter Hauser, and Mark Strong in their respective supporting roles.

In Cruella, the film takes place in the 1970s era where a young, teenage girl named Estella de Vil is destined to become the greatest fashion designer ever while following the footsteps of her boss Baroness von Hellman. Having been gifted with talent, innovation, and ambition all in equal measures, the real problem is that her dreams didn’t seem to be as fulfilling as her fashion ambition and her boss’ success drove her into insanity. This led her to become a notorious criminal in London, adopting her name as Cruella De Vil. Academy-Award winner Emma Stone (La La Land) stars in her titular role as Estella (later named Cruella) while Emma Thompson (Howards End) steals the spotlight as Baroness von Hellman, a famed fashion designer and Estella’s boss and rival, who is responsible for Estella’s true form and transformation as Cruella. Emma Stone manages to stay above the levels of dramatic acting. She is very confident of playing a character with two forming parts from start to finish. Emma Stone is born to play the role of Cruella as she takes down the characteristic tones and mannerisms to alter the Estella/Cruella persona, which brings a massive surprise as if any Disney performance got an Oscar nomination for any category. But if it’s Best Actor/Actress anyone has talked about, Stone would be a strong contender.

As for Emma Thompson, she seems to be very serious, stubborn, and stern for her role as Baroness von Hellman when it all comes down to playing a meatier part, but she delivers a mighty-fine performance like several other A-list English actresses. Thompson knows the difficulties of portraying Baroness in the film, but in the end, she is filled with amusement and vile, making every second with Stone on screen to feel incredibly savage and captivating.

Stone and Thompson both brought a lot of fascinating chemistry to each other compared to Joaquin Phoenix’s onscreen role with Robert De Niro in Joker from a beautiful upbringings filled with bullying, eating up all the tortures, and family tragedy to the final elements of her transformation for her villainous ingredient, Emma Stone's character follows a similar characteristic arc, but with real-deal clear differences concerning the solution for her problems beyond the control of her character. This is something anyone who wanted to better understand more on the hardcore motifs of any villain.

The main director is Craig Gillespie (I, Tonya). Taking advice from the first two live-action 101 Dalmatians films, featuring Glenn Close, Gillespie decides to revamp the villain with a more superior personality and a wondrous backstory being added to give the character more details and more depth on Stone’s character as Estella/Cruella. He brings the audience to understand about the villain’s life story from being a colorful, happy kids’ tale from the start to the devilish Cruella, which is shown to be less ambiguous. Overall, the balance between the silly comedy and the more dramatic, depressing, traumatic storyline is mostly well-handled, but there are some small moments where Gillespie lets go of the rope. Despite this, Craig Gillespie and Emma Stone offer an incredibly captivating origin story about one of Disney's classical villains being made on the face of the earth. And speaking of Glenn Close, she lands onboard as an executive producer of the film, explaining the pros and cons to Emma Stone about her experiences of playing as Cruella in the first two live-action 101 Dalmatians films.

Actors Joel Fry and Paul Walter Hauser appeared in the film as Jasper and Horace respectively, supporting Stone for the film’s entirety. At first, those two actors seem very serious about their character parts, but in truth, they are extremely hilarious as the famous duo of thieves, trying to provide some laughs and hearts towards Estella/Cruella. While serving as comic-reliefs, both of them share a compelling connection to Estella, one that deserves a better conclusion. Regardless of how difficult one can play a thief, the two actors know what they are doing under the guidance of Stone and Gillespie.

While the film is filled with thrills and chills, the distracting CGI in dogs and other animals appearing in the film, however, don't necessarily overcome the obstacles while crafting this film. The CGI backgrounds, the animals, and their effects being made are way too noticeable for the studio that became purposely identical to the photorealistic-animation superiors and similarities from the increasable-realistic remake of The Jungle Book and The Lion King, which were both directed by Jon Favreau. Nevertheless, the CGI and its effects couldn’t rule out the predictably Oscar-winning costume design, gorgeous-yet-powerful makeup & hair, wonderful production design, and a sweet Hildur Guðnadóttir-flavored score that ties together (and directly) with Joker.

Above all the necessities for the pure villain’s backstory, Cruella is a good movie if not better. It clocks in around 134 minutes long for that timely length. I’ll admit, I do enjoy this more than Joker. This film is deeply a must even though it’s not a movie for dogs and pets out there to watch while you’re at home. Not only is Cruella one of the year’s biggest surprises, but it's also one of the best movies of the year so far. Stone and Thompson really nailed down the key roles. I really like to see Stone having her first laugh as she glimpses up onstage of being nominated for Best Actress Oscar for her role just like Joaquin Phoenix's take as Arthur Fleck/Joker in Joker. If you’re in the mood for any films, you should watch Cruella when this hits theaters and on Disney+ simultaneously.

One more thing, bonus points for the Cruella-fied Disney logo from at the beginning.