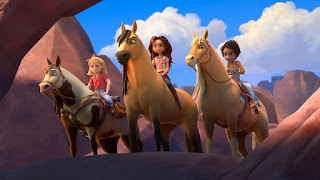 The film is heavily based on the Netflix animated series Spirit Riding Free, created by Aury Wallington, and also the second film to be given a theatrical release in nearly twenty years after the original film, which was nominated for Best Animated Feature Oscar in 2002. The film serves as a directorial debut for main director Elaine Bogan and co-director Ennio Torresan Jr. Spirit Untamed features Isabela Merced in her main-leading role, alongside Jake Gyllenhaal, Marsai Martin, Mckenna Grace, Julianne Moore, and Walton Goggins in their supporting roles being given from the directors.

The film centers on a young girl named Lucky Prescott who befriends a wild mustang named Spirit, who later shares her rebellious spirit. However, when a heartless wrangler and his team conceive the plan to capture Spirit and his herd, Lucky and her new friends must embark on the adventure of a lifetime to rescue the horse that will change her life forever.

Isabela Merced (Dora and the City of Lost Gold) voices Lucky Prescott, a young girl who meets and befriends a wild mustang named Spirit while Jake Gyllenhaal (Nightcrawler, Brokeback Mountain, Spider-Man: Far From Home) voices Jim Prescott, Lucky’s estranged father. The two characters both have a strange and complicated relationship with each other since the death of Lucky’s mother and her father’s ways of keeping her safe after she (Lucky) moved back from the East Coast city to Miradero, a small, not-so-bright rural town located on the edge of the frontier.

Oscar-winner Julianne Moore (Still Alice, The Lost World: Jurassic Park) voices Cora, Lucky’s aunt and Jim’s sister, who has looked after Lucky and has herself moved back with Jim due to her niece’s free-spirited behavior. Moore’s character seems to be in an emotion of being ok, but her overprotectiveness on Lucky threatens her and her own safety and care-free personas. Her character, like Jim Prescott, both have some concerns about Lucky and themselves as they live in a dysfunctional family-life after Lucky’s mother’s tragic passing.

To those who asked about villains, the film does have an emotionless villain in the film. The main villain in the film is the horse wrangler leader named Hendricks (voiced by Walter Goggins, Ant-Man and the Wasp) who seeks to capture Spirit. Walter’s villany really character brings a combination of any fictional villains hating animals as well as messages of animal cruelty and lack of freedom towards the Spirit character in the film.

Under the direction from Elaine Bogan, the film’s main goal is to reintroduce the Spirit character but add some newer, distinguishable characters and newer plotlines on the sheet of parchment paper. The crew did provide the film some terrific visuals despite the film being entirely CGI and some good acting from the voice cast. Bogan, along with the animation crews, wanted to bring back the Spirit character in order to improve the main human characters’ personas and understand the difficulty of any situations the human characters have faced. That also includes family-friendly relationship improvement and doing what’s right for any animal the character(s) have encountered in their journey. This stint really gives anyone the nostalgia chills of National Velvet film (starring Mickey Rooney and Elizabeth Taylor) and Black Beauty movie adaptations.

While the film is interesting to watch, the film lacks the originality and pizazz from the original 2002 animated film, Spirit: Stallion of the Cimarron. It felt that Bogan has focused too much on coming up with an interesting idea on how to keep this Spirit franchise going, compared to the Netflix series. Especially going towards the music, which didn’t improve much, even when the songs are ok, the score becomes unmoved and unmotivated. Regardless of the downsides, the filmmakers just have to make do with what they are given since the hard battle of COVID-19 has forced the crew to work at home rather than in-person as a team.

Spirit Untamed wasn’t a good 90-minute movie. It doesn’t add up to the artistry of the original film, but it’s a film that makes people feel comfortable choosing which entertainment one needs to fulfill. I do respect the all-star voice cast as well as the messages dealing with female empowerment and animal cruelty, but the story arcs and the off-topic flows from the franchise really prevent me from enjoying this film. Some kids might love it, but for grownups, not so much. I hate to say this but go back to watch the original, hand-drawn animated film rather than seeing this terrible CGI reboot/spin-off. To proceed with caution, this animated flick is rated PG.