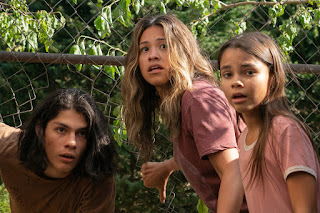 This is a film where no one can't stop me from studying and watching any movies that are interesting to see upon reviewing the trailers and reading other critics’ movie reviews. Directed by Mark Raso and produced by Paul Schiff, this science-fiction film has dropped by on Netflix, featuring the main star of Gina Rodriguez. The film also includes Ariana Greenblatt, Finn Jones, and Lucius Hoyos in their supporting roles.

Awake follows after a mysterious catastrophe wipes out all electronics and takes away humanity's ability to sleep, several scientists are forced to race against the clock to find a cure for the unexplained insomnia before its fatal effects eliminate the human race. When Jill, a former soldier, discovers her young daughter may be the key to salvation, coercing her to decide whether to protect her children at all costs or sacrifice everything to save the world.

Gina Rodriguez (The CW’s Jane the Virgin) starred in the film as Jill Adams, a former U.S. army medic and current security guard at a local college while Ariana Greenblatt appears as Matilda, Jill’s daughter. Let me say this in a positive vibe, Gina Rodriguez is really good in this movie as she played the mother who tries her best to protect her kid while slowly losing her mind. Rodriguez and Greenblatt really bring down a subtle mother-and-daughter chemistry in order to exact many riveting depths and character developments on both of the actresses under the director’s wishes.

The director in the film is Mark Raso who took some directing chores from his feature films, Copenhagen in 2014, 2017’s Kodachrome (starring Ed Harris, Jason Sudeikis, and Elizabeth Olsen), and his 2012 short film Under. His work on the latter has received many film awards in his lifetime. Raso’s direction in the film seems to be in lower-levels of crafting any ordinary science-fiction that can be as good and exciting than ever, like the up-to-pars of James Cameron, Steven Spielberg, and Geroge Lucas. Raso himself, along with the filmcrews, has put some good angles and camera shots in the film focusing on the characters in nice, tonic measures.

However, regardless of the some good characters and the good camera angles, the story really failed to understand what are the events happening and situations the characters have faced. Even worse is the R-Rated screenplay even though there’s children being used in the film. The script is nothing too special to what the film has to offer. Parts of the story arcs, especially the ending in the film, became increasingly chaotic due to lack of comedy and colors in the film and bringing much violence in the film, which is a bit entertaining, but it could not save the movie or story.

Overall, Awake is a terrible movie, maybe the most boring film I ever seen on Netflix. It runs up to 96 minutes. While Gina Rodiguez has successfully nailed down in her character parts, Raso’s direction towards the film, the film crews, and actors starts to slowly degenerate enthusiasm as the story arcs put lots of people to sleep out of boredom. I hate to say this but you’re better off skipping the theatrics. Do yourself a favor and watch something else.